It was a quiet week atop the rankings and a tough week for Notre Dame’s friends in the Atlantic Coast Conference. That league may still have the defending champs and the odds-on favorite to repeat in their title quest but the rest of the conference is looking awfully rough right now.

The Week’s Biggest Loser: The ACC

The ACC launched their own network this summer and probably can’t wait for basketball season to begin. North Carolina in the return of Mack Brown was becoming a bright spot then lost on the road to Wake Forest. Syracuse was supposed to be a quality and team again and have been out-scored 104-26 over the last two weeks. Pitt couldn’t find a way to win at Penn State in a close game. NC State was soundly beaten by West Virginia. Furman nearly toppled Virginia Tech. Citadel actually toppled Georgia Tech. Worse than all, Boston College was blown out at home by a Kansas program that won their first Power 5 road game since 1732.

Kirk Ferentz moves to 4-0 against Iowa State’s Matt Campbell in this in-state rivalry. This should move the Hawkeyes up the polls and put them in position to feel good about contending in the Big Ten West. They still have some difficult games remaining (at Michigan, Penn State, at Wisconsin, at Nebraska) which includes several tough ones on the road.

This was one of the more boring weekends for the top teams with the exception of Florida who lost quarterback Feleipe Franks for the season but was able to hold off a scrappy Kentucky team. This should push the door wide open for Georgia to breeze to the SEC East title, one would think.

This week I’m most interested in that group of teams from 13 through 17. That feels like a really nice collection of teams that aren’t being talked a lot of about but could find themselves making a push for a major bowl game later in the season.

It seems like every week, no matter what, the last 2 or 3 teams in the weekly poll are merely placeholders for someone to take their spot soon. Surely no one believes in Arizona State after a 216-yard performance in East Lansing that somehow landed them a victory? But as we must admit someone has to be in that ranking so if not ASU then who?

By the way, here are the latest SP+ rankings for the Irish opponents:

You can read Brendan’s latest win probability matrix to give you a good idea of how the Irish are moving really close to a projected 10 wins this season. That looks really fun but to date the schedule is looking much softer than it did during the pre-season. For a history-drenched program like Notre Dame it does feel kind of gross to cheer on more projected wins based solely on our opponents beginning to suck.

We can throw a lot of blame at Stanford for torpedoing the schedule as they’re free falling and might lose their third game in a row this weekend with a bowl game looking unlikely at the moment. Yes, unlikely! That’s a tough one for the Trees who we thought would be the third game of a challenging road game trident in 2019.

Worse still for schedule strength matters, no one really looks poised to move up the rankings much except maybe Virginia? The Hoos look like a strong candidate to run away with the ACC Coastal Division right now. 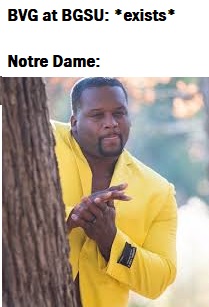 We’re in the meme game.

Utah (-3.5) at USC – It’s early, this is Utah’s first conference game after all, but if the Utes win this one their odds of winning the Pac-12 South will go through the roof. They can probably absorb a couple losses along the way and still take this division. The Trojans as home dogs feels about right, as does this line. Utes 27-23.

Michigan (+3.5) at Wisconsin – Well, well, well Michigan was favored in every game at one point before the season began and that ended quickly. I’m normally pretty antagonistic towards Wisconsin but that pales in comparison to the Wolverines. Let’s go big. Badgers 34-19.

Auburn (+4) at Texas A&M – There are games that you look at and think that’s a schedule loss in the SEC. This is one of those for Auburn. By the way, this is the second of five teams currently in the top 8 that A&M has to face. If they don’t win this one at home then 7-5 is looking like the absolute best they can do absent a massive upset to someone like Alabama or Georgia. Aggies 24-20.

Washington (-6) at BYU – This has been a nice little run for BYU who toppled Tennessee in Knoxville and turned around with an overtime thriller over USC. This ends a brutal stretch to open the season and unfortunately this energy high will catch up to the Cougars. Although, I’m sure this will be a very close game. Huskies 28-24.

Oregon (-10.5) at Stanford – The Ducks have lost 3 straight in this series, including some brutal defeats which has to stick in their craw. The Cardinal are at perhaps an all-time low physically and emotionally in the David Shaw era. I predict pain. Ducks 41-20.

Oklahoma State (+5) at Texas – I haven’t been picking many outright upsets this season. We also haven’t heard much from the Fighting Gundy’s as they’ve won some pretty blah games while flying under the radar. It’s time for some craziness in the Big 12. Cowboys 45-40.

Would absolutely love to see Texas get smoked by OSU. Or at least give up 50 in a loss. I think they’re a fine team, but I don’t think they’re one of the 10 best in the country, which some people (coughESPNcough) were shouting after a loss to LSU. Plus Tom Herman mostly just annoys me.

Hopefully they eventually get it to the optimal amount for live play, which is zero.

At least UNC can still go undefeated in the ACC! And WF picked up a nice out of conference win.

Heh… I was very much thrown by that little arrangement and incorrectly corrected a few people. For those who don’t know, they scheduled each other as a technical OOC game – the game doesn’t count in ACC standings – because they didn’t like how rarely they’re slated to see each other post-divisional-split.

Interesting, I guess. Or not.

I find it /extremely/ interesting. I still can’t decide if I like the scheduling a whole lot or if I loathe it.

Honestly, kind of shocked there wasn’t more of a discussion about this. It’s kind of a mind-f*** and I’m here for it, I guess.

Also I was/am bored and looked ahead at future schedules. ND’s 2030 ACC slate is Duke, FSU, UNC, BC, Louisville. Looking at those games with today’s teams, this is a worse schedule than this year’s (Subbing UVa & VT for UNC & FSU), which is already a pretty weak slate.

Conversely, 2022 & 2023 both have OSU & Clemson. This seems harder. Might be the chance for a 1-loss ND to get into the playoff mix, assuming the playoffs are still only 4 teams in 3-4 years.

2021 could be real interesting. A lot of teams on the schedule that were very good recently, but are treading water now. If VT FSU and USC get back to where they’ve been, that could be brutal. The flip side is that all of them could have brand new coaches trying to restart from the ground up too. Not to mention Wisconsin on the schedule, plus Purdue, UVA, and Stanford as real wildcards whose future trajectories 2 years from now I can’t even guess.