In week one, Notre Dame destroyed a decent Nevada squad 35-0 in South Bend. Ten years ago this week, the Irish traveled to Ann Arbor to take on RichRod’s second Michigan team.

A Forcier to be reckoned with?

The 2008 Michigan Wolverines were a complete disaster, finishing 3-9 and losing five games by 18 or more points. It’s strange symmetry that Notre Dame’s 3-9 season in 2007 was replicated by the Wolverines the following year. To add to RichRod’s evolving calamity, Michigan was placed on probation and forced to self-impose sanctions for violating NCAA practice rules. Rodriguez had pretty much spent what little capital he had accumulated in Ann Arbor thus far, and 2009 was going to be a “show progress or get out” kind of year.

Going up and down the rosters, there’s no doubt Notre Dame had the better overall team, but Michigan had a wild card in Tate Forcier. The former blue chipper from California had played well in the season opener against WMU and now had the label of “future Pat White” through his association to RichRod. Some guy named Denard Robinson also waited in the wings as a change-of-pace runner.

The Irish were three-point favorites on the road and were looking to score more than 17 points in Ann Arbor for the first time since 1999. Spoiler alert: they would do so, but as for everything else…

*If you would like to watch the full game in its entirety (I don’t know why you would), click here. If you want DownInTheBend’s condensed games from the 2009 season, you can find those here.

Some things I noticed while re-watching:

The biggest takeaway everyone had from this game was Charlie Weis’ decision to throw the ball twice when Notre Dame was attempting to run the clock out. With 2:29 left, 2nd and 9 and Michigan down to its last two timeouts, Clausen threw incomplete twice in a row to give the ball back to the Wolverines. The Irish took a grand total of ten seconds off the clock and Michigan got the ball back on its own 42-yard line without using a timeout. The AP game summary described it as “Charlie Weis giving an assist.” Ouch.

Weis defended his decision by saying that Armando Allen was banged up and needed rest, but much like he did his entire tenure at Notre Dame, he never trusted a second-string running back to carry the ball. Furthermore, Michael Floyd was out for this series with a minor injury which made throwing the ball an even more fraught decision. That being said, Golden Tate was definitely interfered with on Clausen’s first throw, but why call such a low-percentage play in the first place? A bomb down the left sideline?

As for the third down throw, Clausen just missed Shaq Evans who was wide open. All of a sudden, the somber-looking UM fans started to perk up on ESPN’s broadcast. I can understand Weis’ rationale of being aggressive, but ultimately this was a “decided schematic advantage” series of play-calling. After gashing the Wolverines’ defense all game long on the ground, he just could not bring himself to trust his offensive line to get a first down. Instead he opted for airing it out despite not having arguably ND’s best wide receiver of all-time on the field.

When coaches are on the hot seat, they can’t afford to take what same call an “albatross loss”. This is an unforgivable loss that usually occurs early in the season and completely takes the wind out of the rest of the year. Some recent non-ND examples of this include Kevin Sumlin’s Texas A&M blowing a 34-point lead against UCLA in 2017 and Willie Taggart’s opening loss against Boise State two weeks ago.

This was the definition of an albatross loss. Michigan would go on to finish 5-7 and Forcier ended up getting benched for Robinson by week nine. RichRod seemed to acknowledge that ND was a much better squad during his briefly infamous press conference:

“The quarterback is an NFL guy. They’ve got two of the best wide receivers I’ve seen in years and their running back is a big-time player. And did you see the size of the linemen? They could eat peanuts off our guys’ helmets.”

Pretty much everything he said was correct, this was still an crazy talented team that had a lot to play for. Still, the Irish still found a way to lose to an inferior opponent and the burden on Charlie Weis’s shoulders was growing larger. Michigan State waited in the wings, and now every week was do or die. The worst part of it all?

They lost to Michigan.

Other Things that Happened that Week

This is the one exception to my general belief as I’ve grown older that you can’t blame a missed call for the outcome of a game. As much as any game can ever be taken away by an officiating crew, this one was. Allen’s TD reversal for supposedly stepping out of bounds was complete hogwash, UM DBs were given carte blanche to maim receivers to a ridiculous degree all day long, and to cap it all off, the back judge practically tackled Greg Mathews on the winning TD specifically to prevent him doing any celebration they’d be forced to flag. When Weis tried to get some answers about any of this at the end of the game, the officials straight up ignored him. (Similar shadiness would prevent IU from beating Michigan just a couple weeks later; the league clearly desperately wanted Michigan to be ‘back’.)

If this game (1) had happened to anyone in a conference and not to ND, which had no one to stick up for them, or (2) had any stakes at all in retrospect, the B1G would’ve had a lot more to answer for.

I tried to avoid the officiating, but it was rough going back and re-watching their corners grab Floyd and Tate. It was the only way Michigan (or any team) could slow down our wide receivers that year.

I threw a fit after this game was over because it was the worst officiated game I’ve ever seen and still is to this day. You can’t tell me the Big Ten refs weren’t blatantly cheating!

Ah cool, the one non-Purdue road game I attended as a student. Don’t really remember very well how it went, I bet reading this will definitely bring back great memories and joyohgodohgodohgod

Who were the other backs who could have played behind Allen?

“Weis defended his decision by saying that Armando Allen was banged up and needed rest, but much like he did his entire tenure at Notre Dame, he never trusted a second-string running back to carry the ball. ”

Hughes actually got the first carry after Allen got hurt and only got one yard, but he was always a pretty dependable runner in my eyes. I’m really not sure why he didn’t get at least one more shot at it. Aldridge had actually switched to fullback for that season, strangely enough.

Jonas Gray was also in the rotation, but he had fumbled earlier and there was no way he was going to get a carry in crunch time.

The best part of this article is that the subtitle also succinctly summarizes Weis’ tenure at the helm.

I still refuse to watch Michigan games in person because of the heart-breaking misery this stretch of games left me.

Ugh. This is the game where Tate Forcier pump faked a guy out of his cleats despite being like 15 yards past the line of scrimmage. 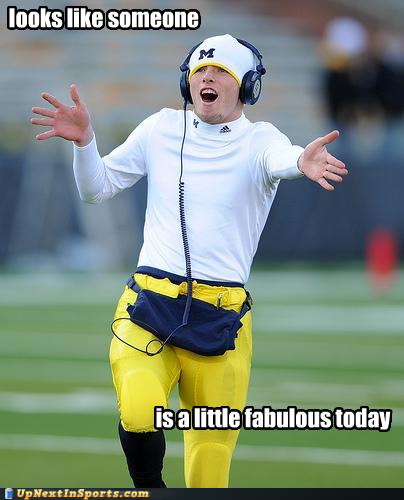 Site still running strong after all these years. http://www.qbforce.com/