To be honest, the 2017 version of Notre Dame football was set to go down as my all-time favorite up until kickoff at Hard Rock Stadium. It was the first time that Notre Dame looked the part of an undisputed national title contender since when, 1993? After they pummeled Penn State in 2006? Two years ago, I truly believed that I was watching the best Notre Dame team since 1993. It was certainly one that looked the part.

The biggest reason why I will always fondly remember this team is because for 75% of the year, the Irish were absolutely destroying teams. Yes, the 2012 and 2018 teams were both undefeated in the regular season, but we all know those squads didn’t always have that extra gear that could put opponents away. Outside of losing to a Georgia team that ended up being a choke away from winning the national title, the 2017 team was never seriously threatened in the fourth quarter before heading to Miami.

A Lovely Run of Football

All of this culminated in a brilliant stretch from the end of the Georgia game to the Wake Forest game where the Irish were rolling in a way they hadn’t in a very long time. Here are some quick bullet points about that specific seven-game stretch:

*Because Bill Connelly changed his S&P formula, we can’t exactly nail down how good the Irish were during these seven games. I’m just making an educated guess.

I like to highlight this batch of games because most of us had forgotten what it was like to root for a truly dominant team. There was certainly a subset of fans who wondered if Notre Dame was even capable of doing something like that ever again.

I tried to find a team since the Lou Holtz era that had come close to accomplishing something like that. The criteria I used were A) ND had to win five or more games in a row during a single season, B) They had to win by an average of more than 16 points a game (edge of two-score margin). I could only find six examples of this happening: 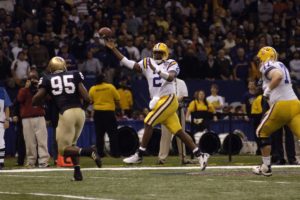 So, you’ll see that flawed Irish teams would mostly feast upon weak schedules and then get destroyed in the postseason. But this also demonstrates just how hard it is to be this consistently dominant, much less rise to the level of Alabama and Clemson who can beat up good teams for multiple years in a row despite roster turnover. Not even the outstanding 2015 ND team (which was maybe a top-four team in the country when healthy) could pull off a stretch like this despite a lineup full of future pros.

Despite an unprecedented run of excellence in 2017, it ended in catastrophic fashion against Miami. In my eyes, it is simply the worst performance by a good Irish team in my lifetime (this unfortunately has a lot of competition). Not only did the collapse happen against an ancient rival that was having a charmed season, it was an embarrassing shellacking on primetime where there was nowhere to hide. It was truly a “WTF” game.

Only then did we realize that Brandon Wimbush’s inability to throw the football was a truly fatal flaw. It was a minor miracle that Wimbush made it nine games without defenses (excluding UGA) accounting for the one glaring weakness that was guaranteed to bring the offense to its knees. We learned just how important it is to have a QB who can make the simplest of throws, as it turns out you can’t run gimpy Josh Adams 40 times against a stacked box just because #ManBall. Not even a once in a generation left side can consistently pave the way when outnumbered in the trenches. 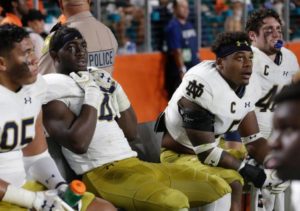 Of course, we all know that the season essentially disintegrated until Ian Book and Miles Boykin saved the Citrus Bowl. Granted, the schedule was hard as hell down the stretch, with pesky Navy sandwiched between road games at Miami and Stanford. Still, it was an extremely disappointing fall from grace for a team that was looking historically good.

So why is this important?

When the 2012 team made the national title game, we rallied around the idea that the plucky underdog who’d played close games could pull off the upset against an emerging dynasty. I believe most of us completely discounted that ND only won six games by double digits or more during the regular season, instead favoring the “team of destiny” argument. We saw how well that worked out against a team in Alabama that actually had a championship pedigree.

Winning in dominant fashion truly does exhibit an extra gear that only elite teams have, and it is a surefire way to determine who’s a contender and who isn’t. You would have to go all the way back to 2006 Florida to find the only team of the last 20 years to win a national championship with an average regular season point differential of less than 16 points per game. In the playoff era, the eventual national champion has won its regular season games by an average margin of 24.8 points per game, with 2018 Clemson being the best at 31.7 and 2015 Alabama having the lowest at 19.7. In case you were wondering, the last time Notre Dame has been above 20 points in that regard was 1996 when they only played 11 games.

The point of this post was to demonstrate that it’s still possible for ND to play at a level that suggests true championship contention, but it takes more than half a season to prove that. The first nine games of 2017 provided the first real glimpse at a consistent higher level of play, something which also carried over to last year’s playoff team. Of course, there is so much information that must be placed in appropriate context, but right now the bar is higher than it’s ever been for programs trying to break into title contention. Simply put, the Irish are going to have to start blowing opponents out like they did in 2017 if they want to be taken seriously.

Great article, man 2017 was so refreshing after the 2016 nightmare and wondering what direction the program was headed. I think the lasting image I have is Josh Adams running for daylight after a monster combo block by Nelson and McGlinchey, those guys were just so unreal and fun to watch literally dominate.

To the latter point, I feel like the national fan doesn’t even remember of care about ND blowing out USC that year or comfortable wins over Michigan St, NC St, whomever. ND has to win a “big one” like a primetime Miami game or against a top-10 FSU or a Clemson type of team to get any sort of respect.

Another chance at that @UGA, if they lose I get the feeling that it’s a “so what” and expected type moment. But a big win at an SEC powerhouse would be continuing this best-since-Holtz run they’re on.

Thanks, really appreciate the feedback. When I was re-watching some of the highlights for that year, Adams and the O-line really seemed to symbolize the whole season. He was shut down in all of their losses but absolutely dominated in the wins. It was a real shame that he didn’t break the single-season record for rushing yards.

The strange thing is that while ND has really struggled in big bowl games for a myriad of different reasons, they have often been so close to getting a signature win in the regular season. 2005 USC and 2014 FSU come to mind. A win at Georgia would help us much like Clemson needed a win over us in 2015 to really launch their current run.

The USC thing is a good point. ND absolutely destroyed a USC team that won the Pac-12, a spectacularly impressive win by any measure, and it’s completely slipped through the cracks among our fan base. It’s a strange phenomenon.

I think the biggest reason why that win didn’t resonate as much as it should have is because SC had already lost to Washington State and had looked pretty middling in the rest of their games. It was a big win for sure, but even Brian Kelly told the team beforehand that he would be disappointed if they didn’t win in a blowout.

Josh Adams would have been a perennial pro-bowler in the NFL even 10 years ago. No doubt in my mind. It’s really too bad for him the Eagles just traded for his clone, Jordan Howard.

Everyone rightfully heaps praise on that offensive line, but Adams was soooo good that year. Led the nation in yards after contact if I’m not mistaken, and he was surprisingly nimble for a guy his size. Plays like this were just as important as the home runs he would hit.
https://youtu.be/eex0xUl_Wfg?t=67

The nagging injury killed any hope of a Heisman campaign (plus Baker Mayfield putting up absolute video game numbers sealed the deal) but sadly it really seemed like Adams was the best chance for a Heisman in such a long time.

…Even though undoubtedly Te’o was the best player in CFB his senior season, with the defense bias I never really thought he was going to get a fair shake, and he didn’t.

If he had continued his trend of 150-200 yards a game, he could have finished with close to 2,000 yards which is the benchmark for running backs winning the Heisman. Unfortunately even if he hit those numbers I think Baker was going to win it, he set the single-season passing efficiency record and led an all-time great offense.

At this point, it’s just impossible for defensive players to win the Heisman. I’ll have to see it before I can believe it, although for me Jabrill Peppers getting an invite to New York in 2016 was more of an insult than Manti not winning it in 2012.

Very well written, and very illuminating. Thanks for taking the time and trouble to put this together!