One of the biggest question marks heading into the season was how the linebacker position would shake out.  I wasn’t overly concerned because 1) there’s plenty of raw material to work with, and 2) I’m pretty sure Clark Lea is good at his job.  But Lea still had his work cut out for him.

However, one of the bright spots of fall camp was the play of Jeremiah Owusu-Koramoah.  Practice reports raved about his speed and athleticism.  But how that would translate to the field was still an unknown.

So today in the 18 Stripes Film Room, we’re going to take a look at Owusu-Koramoah’s play against New Mexico.  Specifically, how he struggled against screens early on then ultimately corrected it. 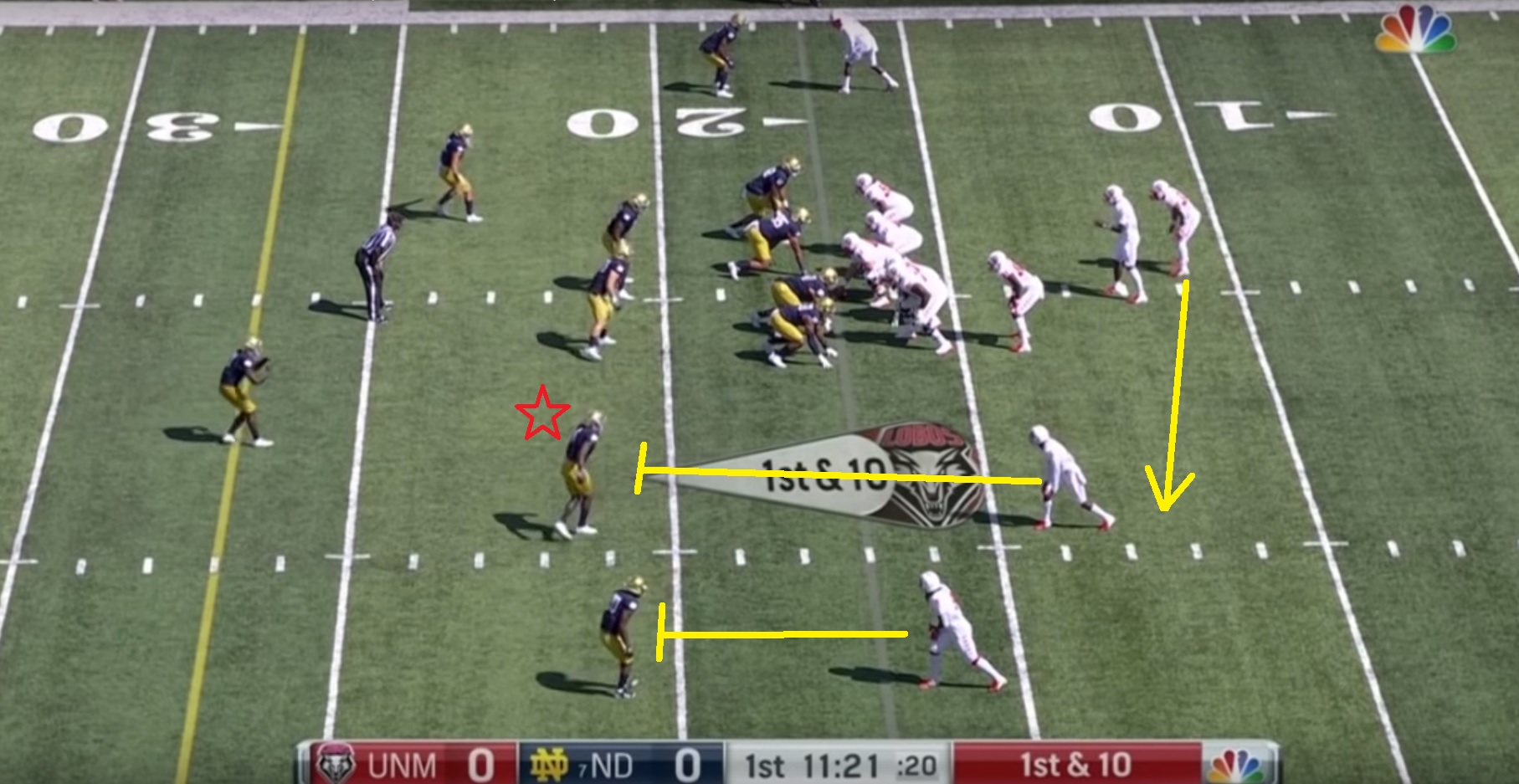 Owusu-Koramoah (red star) is lined up over the slot receiver.  New Mexico will motion the running back towards the sideline and then throw a quick screen to him.  The two receivers will block Owusu-Koramoah and Shaun Crawford, the corner. 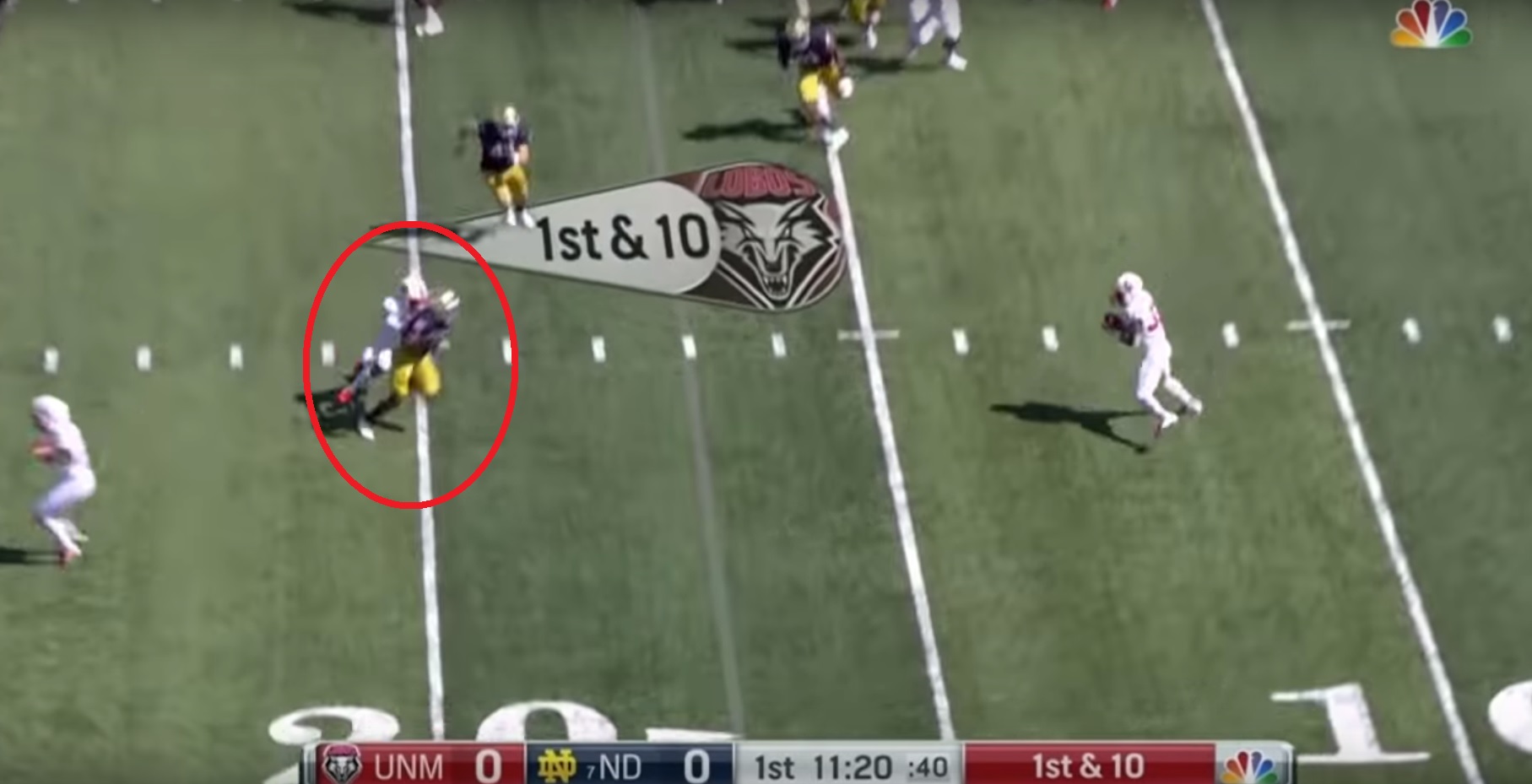 Owusu-Koramoah diagnoses the screen but is too eager to make a big play.  He cuts outside of his blocker – which is fine – but takes a bad angle to the running back, probably hoping to get a big tackle for loss. 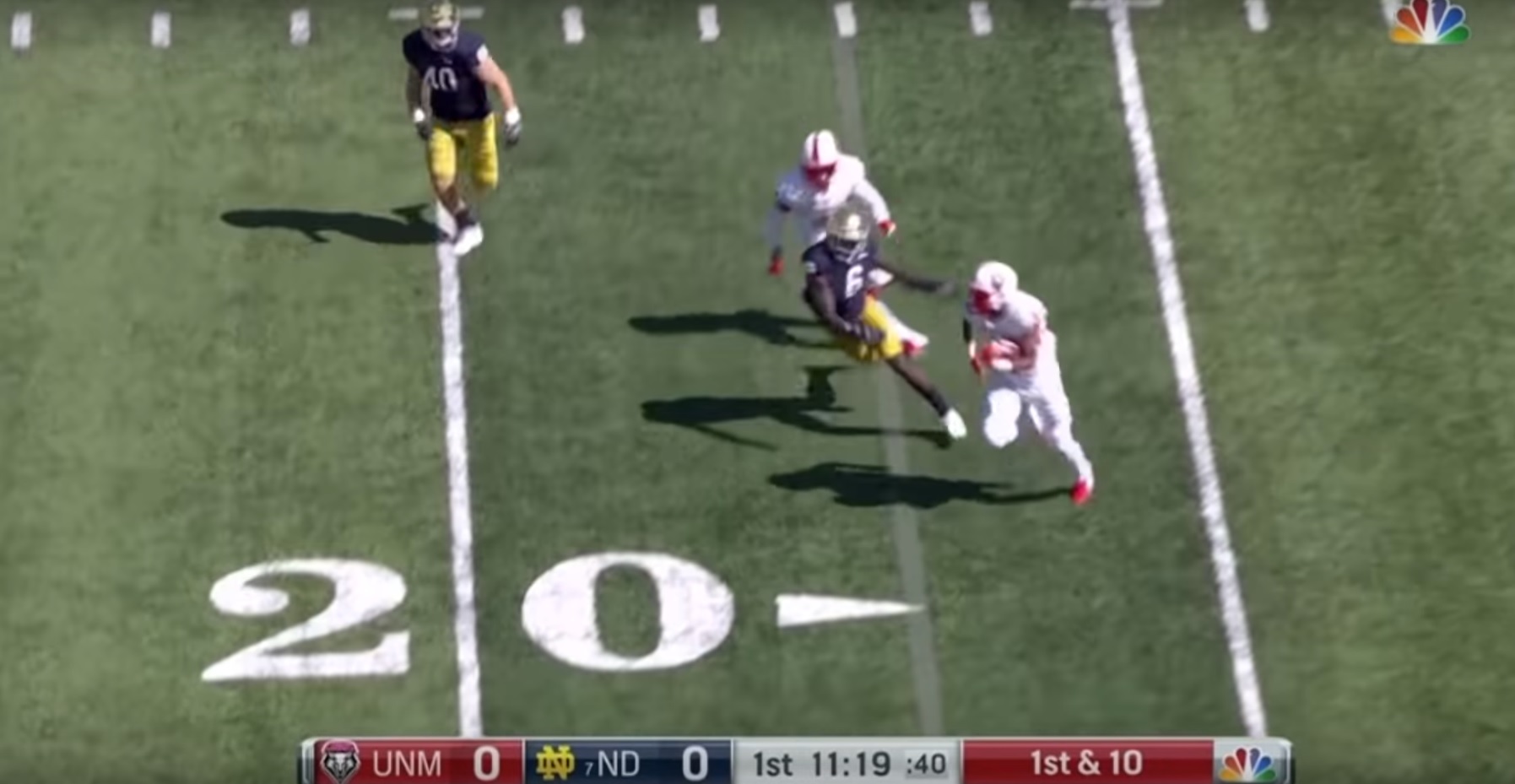 Owusu-Koramoah is too far away and there’s too much space for the running back.  He simply bounces outside and gets around Owusu-Koramoah easily. He instead needs to force the back to the sideline to limit the yardage.

New Mexico ran the exact same play on their next drive, with the same result. 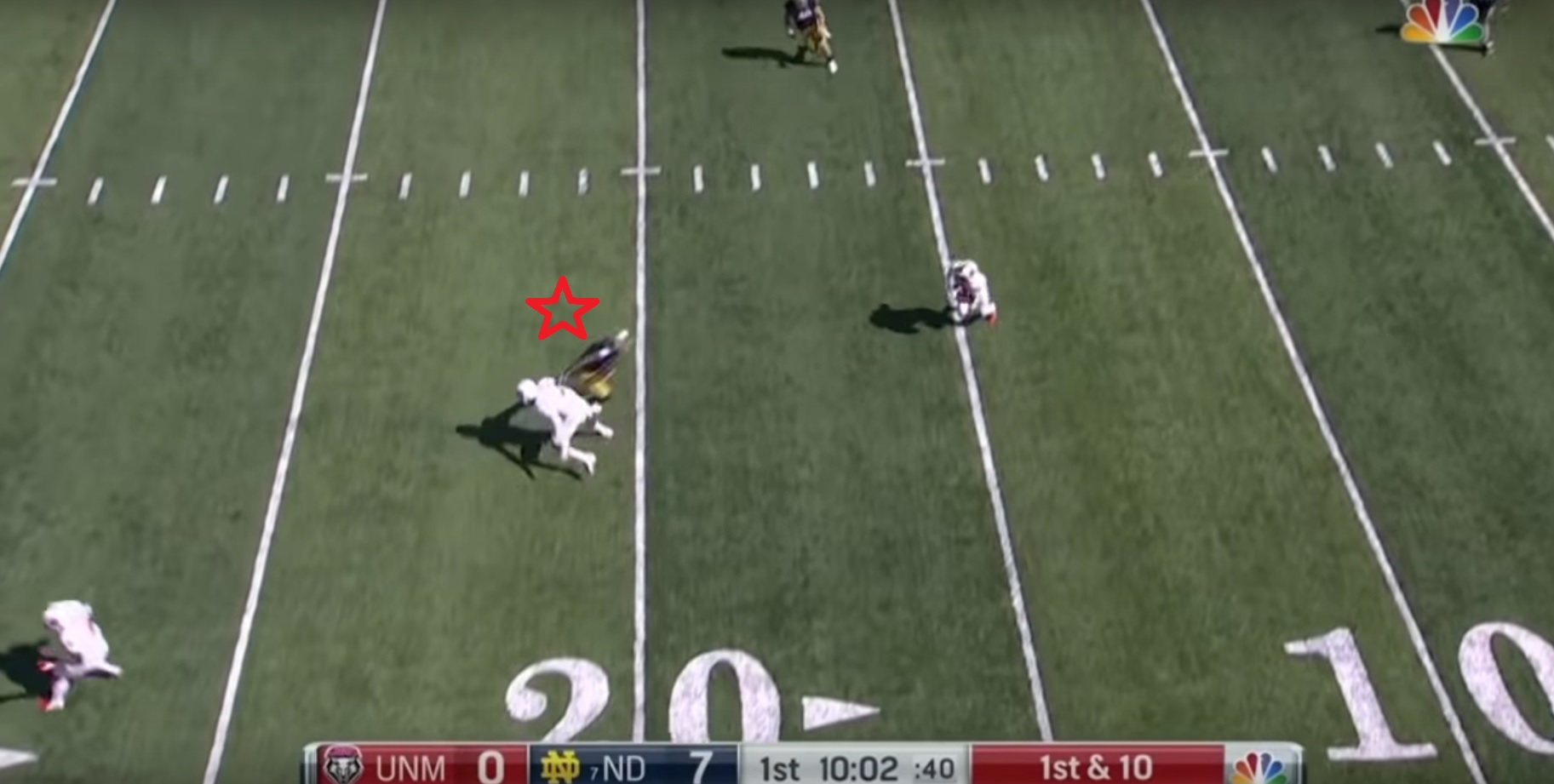 As I said at the beginning, I’m pretty sure Clark Lea is good at his job.  And the next time New Mexico tried to run a screen, Owusu-Koramoah was ready. 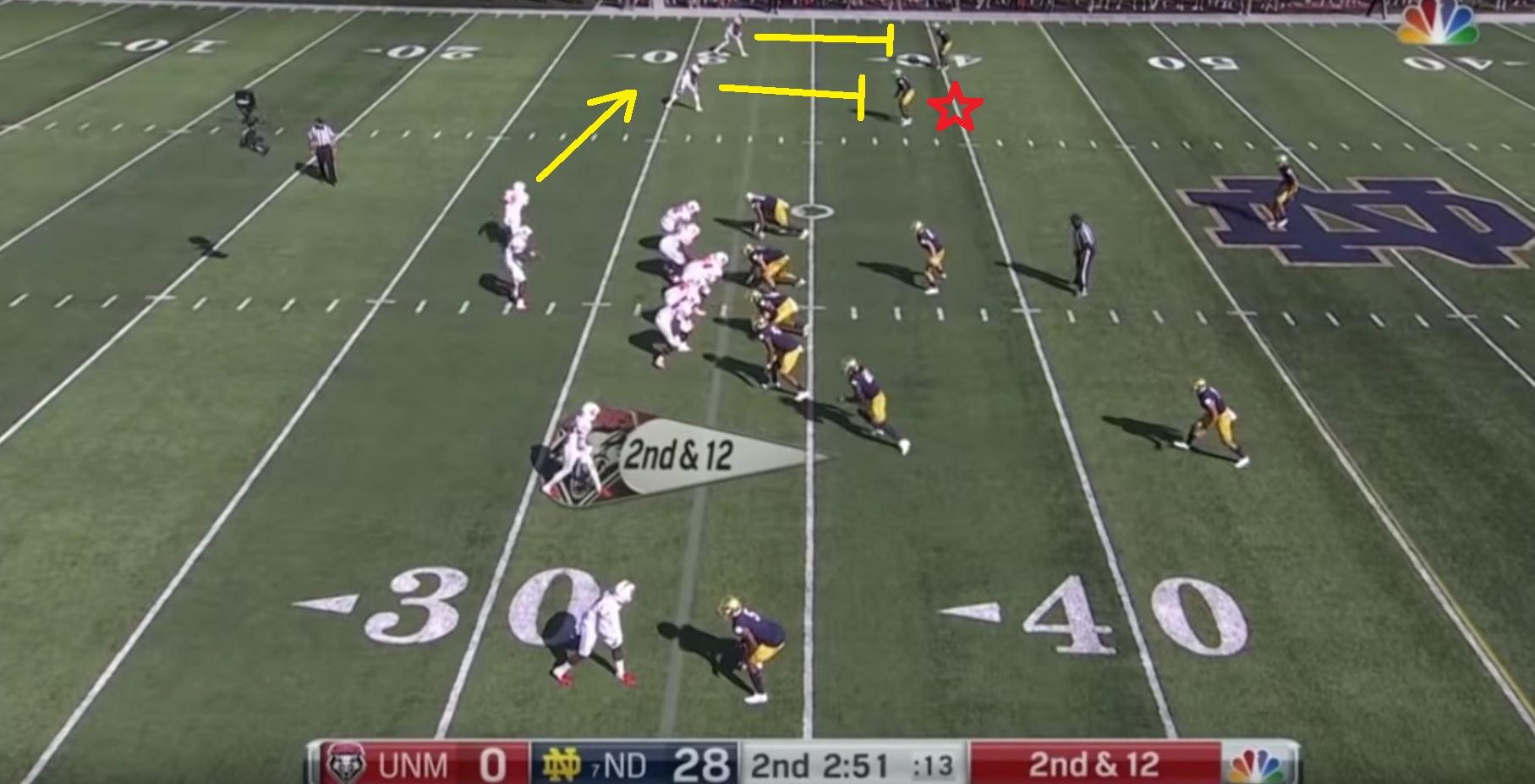 (Look at that fine camera work.  Thanks Sky Cam!)

Late in the half, New Mexico attempts the same running back screen.  Owusu-Koramoah (red star) is again lined up over slot, about twenty miles away from the TV camera. 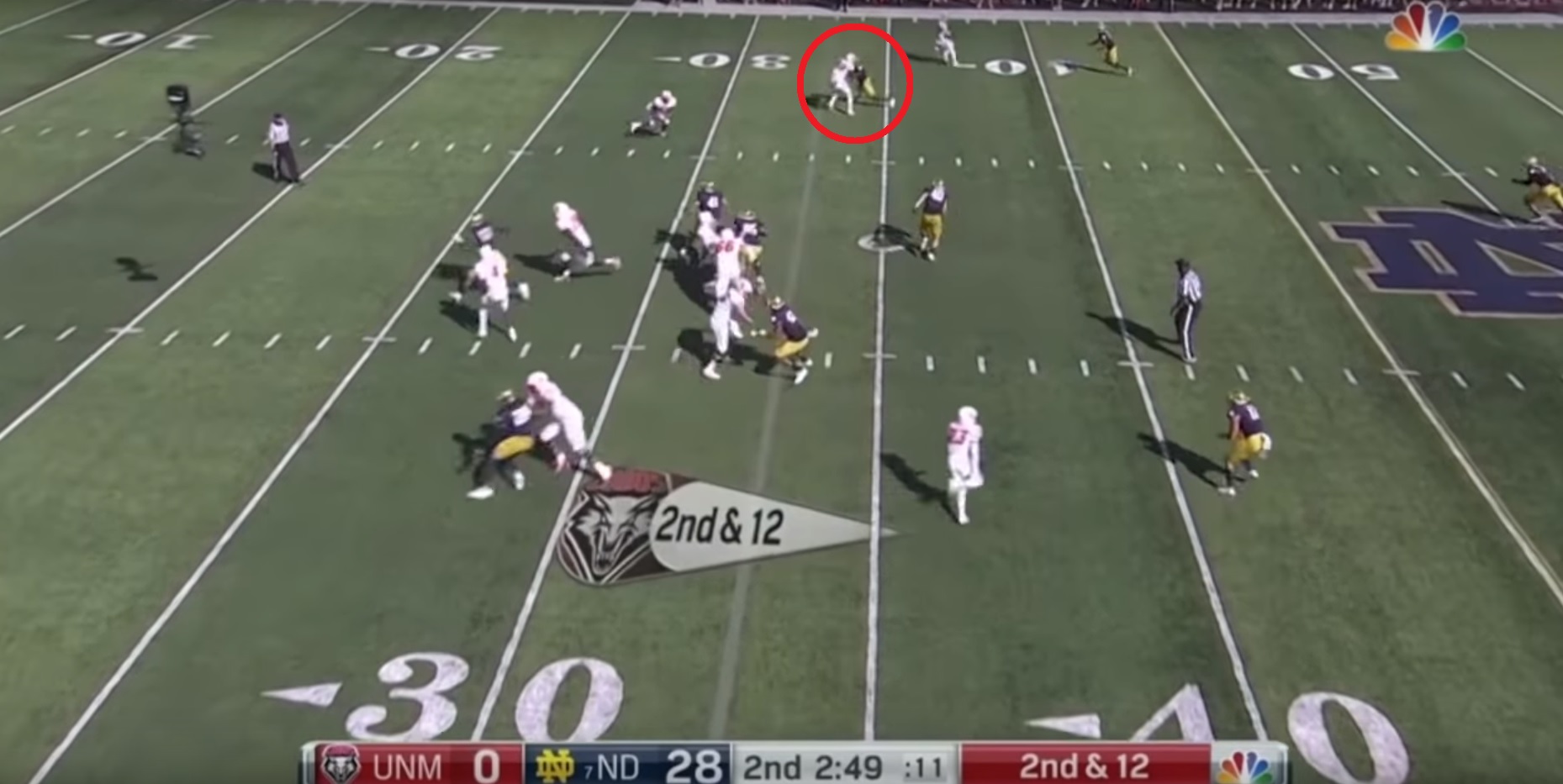 This time Owusu-Koramoah attacks his blocker instead of going around him.  This is what he needed to do on the previous two plays.

The running back, maybe expecting the same reaction from Owusu-Koramoah, tries to go outside again but is instead tackled at the line of scrimmage.  But even if the running back had cut inside, Drew White was bearing down on him.  This time Owusu-Koramoah played his part perfectly.

The young linebackers are still learning the position – Drew White’s play has been similarly up and down – but if they can clean up the mental mistakes, they have the potential to be a strong position group.

Thanks for the breakdown! That seems like a lot of screen passes — was that Charlie Weis out there calling plays?

Great review. I really like learning more about these things. Is there a good resource to learn more about formations, playcalling, and technique? I never played so I don’t know much about the nuts & bolts, but would like to become a more educated spectator.

smartfootball.com is a great resource. The site is no longer active, but I learned a lot reading through the archive. Chris Brown has written stuff for other sites, so googling his name will probably bring his stuff up. There’s also tons of other sites and YouTube videos that are just a search away. Even just searching something generic like “spread offense” generally works.

If you want to get REALLY in the weeds, you can look for playbooks online. Seaching for “

Thanks for choosing these plays. i noticed the lack of outside contain the first two time…wasn’t certain who was responsible, but i also noticed that it got better. Great sign for the young players to learn and adjust in-game.

Also, man, those camera angles are terrible. Why would you want to be zoomed in so much that you can only see 6/22 guys on the field one second into a play (and 4/22 within 2 seconds), as apparently was the case on the first play? Awful.