Welcome to part two of my preview of the Texas Longhorns offense.  You can check out part one here.

First, let’s get one thing out the way.  If you are as big a college football addict as I am, you might already know that Sterlin Gilbert did not call plays at Tulsa.  That duty was performed by Tulsa head coach and former Baylor OC Phil Montgomery.  So what we’ll cover here may not 100% represent what we’ll see from Texas in September, but this is what we have to go on so we’ll roll with it.

For my analysis, I looked at Tulsa’s bowl game against Virginia Tech 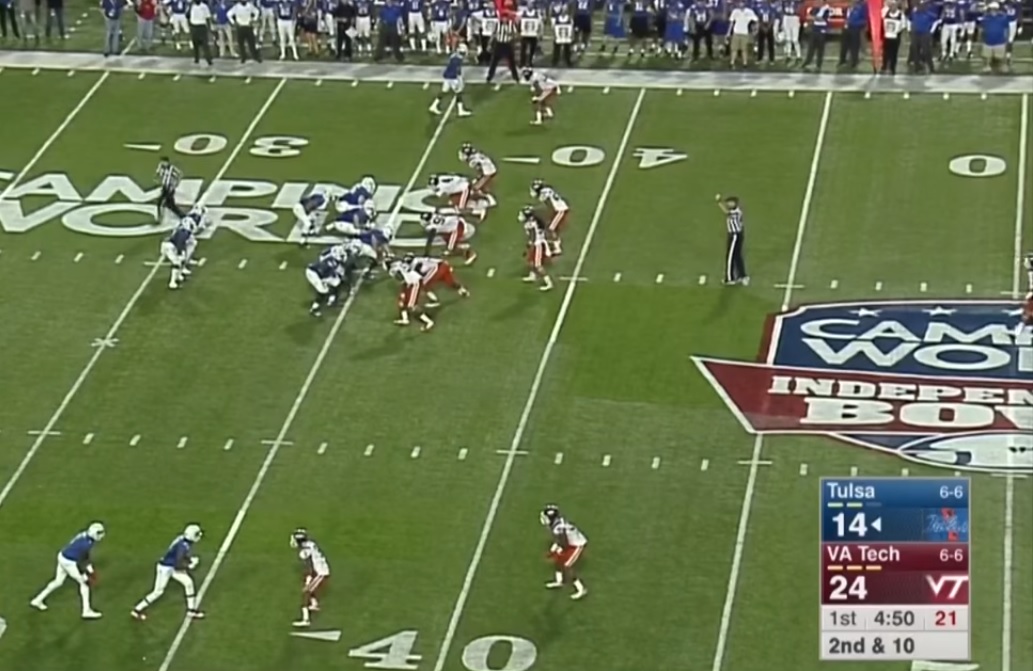 It’s a pretty standard spread alignment – quarterback in the shotgun, three receivers, and a tight end that mostly acted as a fullback/lead blocker on run plays.

But look at how wide the receivers are split out.  The receiver to the boundary side is almost standing on the sidelines and the two receivers to the wide side are lined up at the numbers.  Compare that to a three receiver formation by Notre Dame: 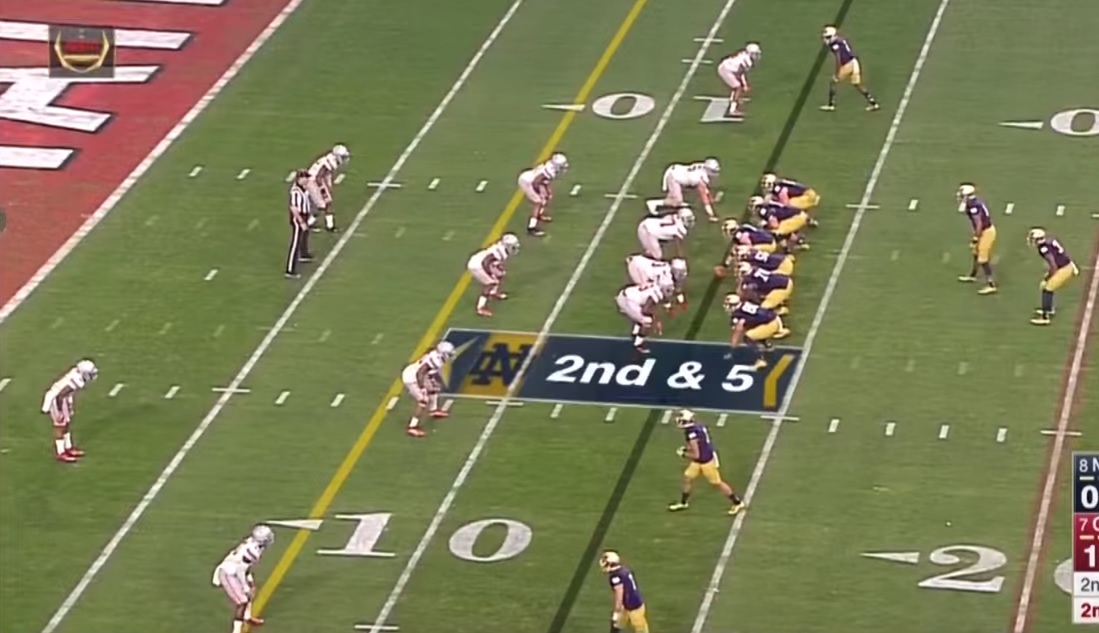 These extreme splits put the defense in a bind.  The defense is forced to show its hand right away, making reads easy for the QB.  If the safeties move out with the receivers to provide second level help over the top, this opens up the running game.  If the safety stays closer to the middle of the field to help on run defense, the receivers will be guaranteed man coverage.  And if the defensive backs play too soft on their coverage, the QB can simply flip the ball outside on a bubble screen.

For example, here’s Tulsa lined up in a four receiver formation: 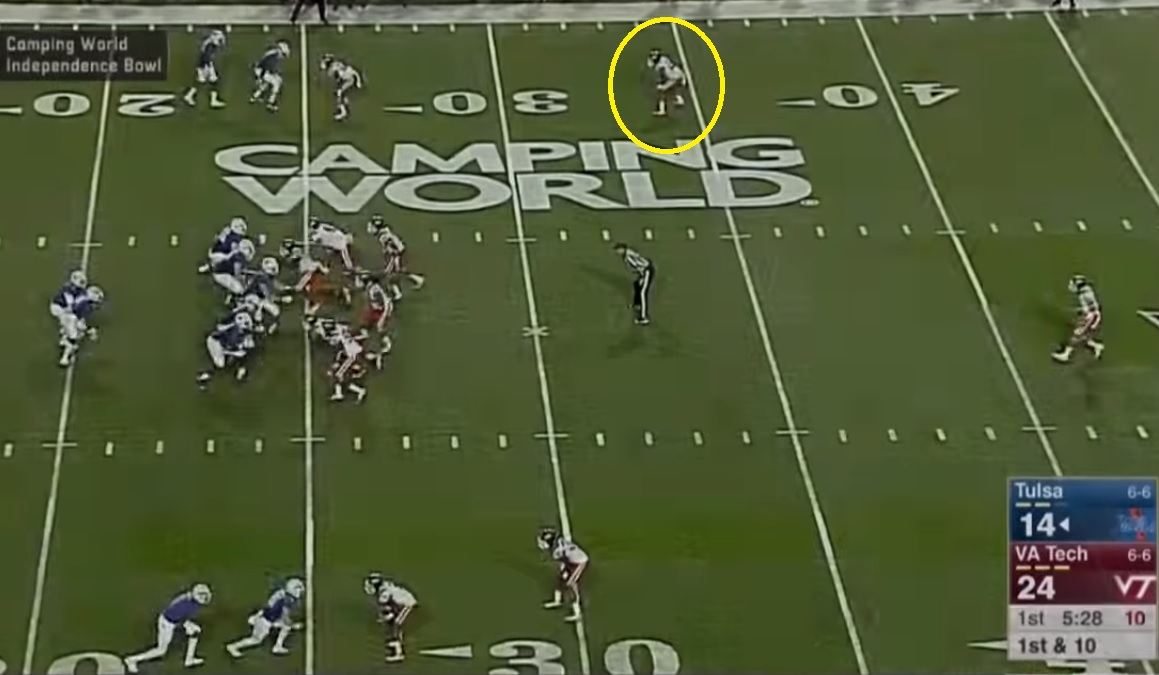 Notice how deep the second defensive back is playing. 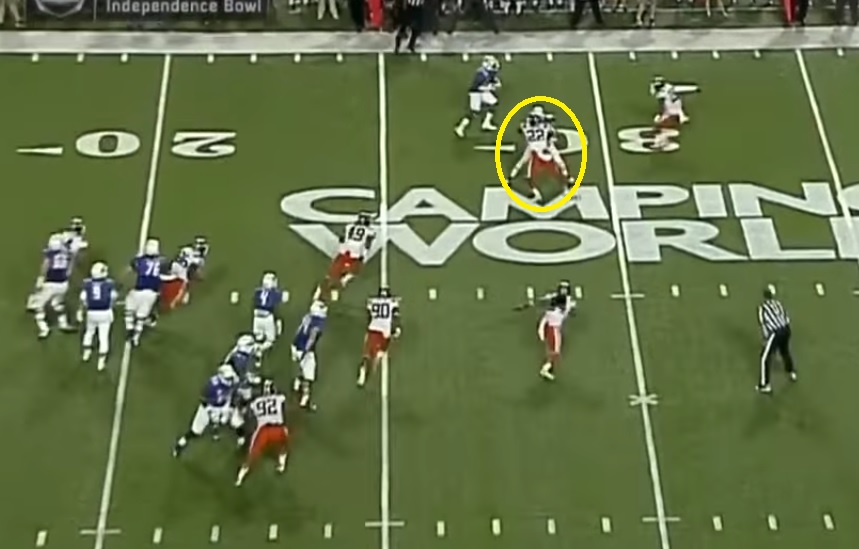 The “lead” receiver throws a block on the corner and now the receiver just has to make one guy miss to make a big gain.

Tulsa’s passing offense built on the conflicts their formations placed on the defense.

As I mentioned above, the wide splits of the receivers often forces the defense to play in man coverage.  Tulsa took advantage of that with a variety of pick plays.

What do I mean by pick plays?  These are routes where two receivers cross paths, with the hope that the two defenders in coverage interfere with each other or run into the receivers themselves.  This leaves one of the receivers open with no one covering him.  This is slightly risky because if the receiver goes out of his way to interfere with the defender, he’ll get called for offensive pass interference.  Notre Dame fans should be familiar with this concept from the 2014 season when

These types of routes are only really useful against man coverage.  If the defense is playing zone, the defenders will let the receivers cross and switch their coverage responsibility.  But as I mentioned above, Gilbert’s offense generally forces the defense to play man coverage.

Let’s take a look at a couple of examples from Tulsa’s bowl game. 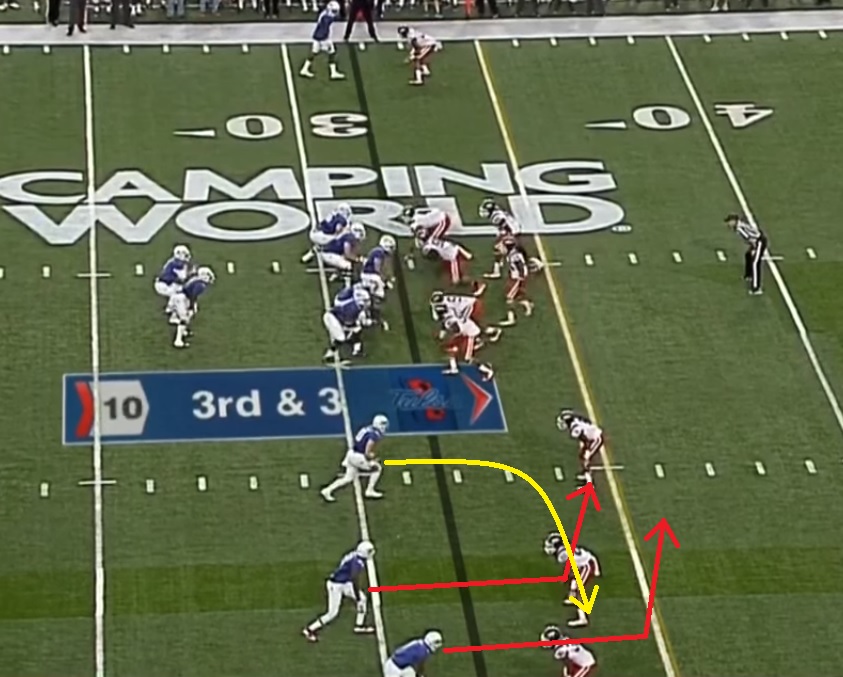 On this play, the outside receivers run slant routes and the inside receiver runs a quick out. 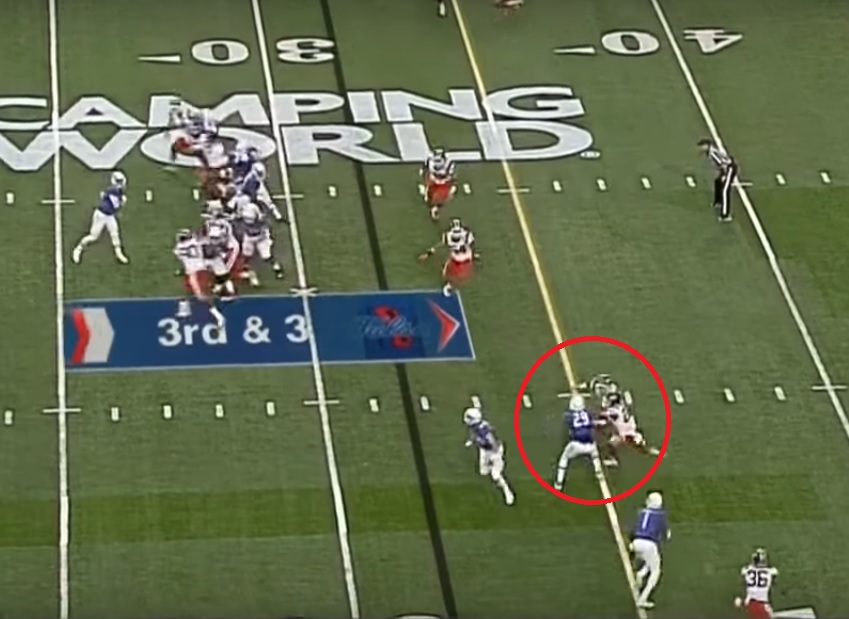 Sure enough, two of the defenders get caught up together and the receiver running the out route is wide open. 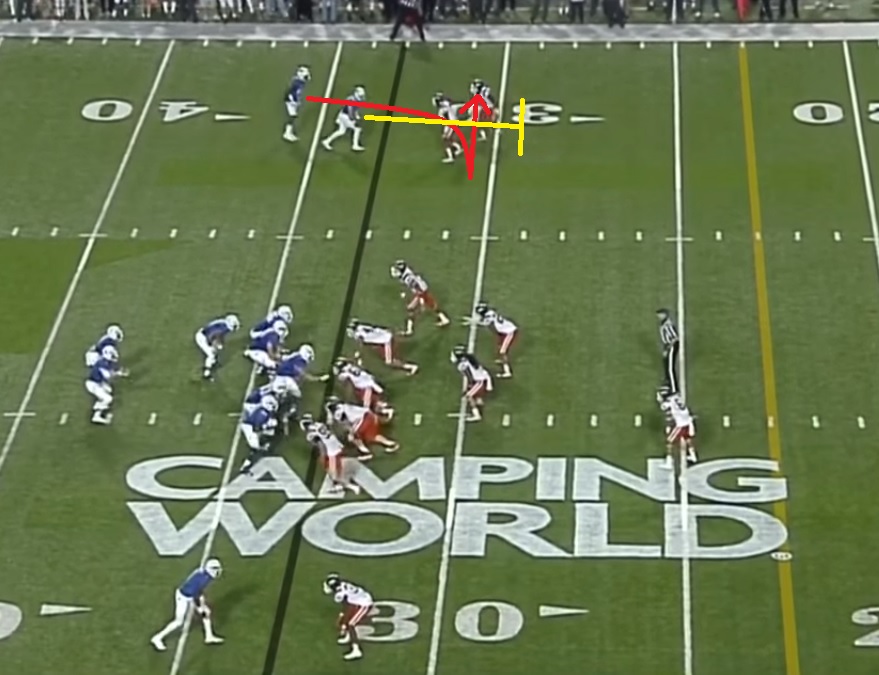 This is similar to the formation Tulsa threw the bubble screen from earlier.  The defenders are playing closer to the line this time.

Here, the lead receiver pushes vertically on a go route while the trailing receiver starts out running inside then cuts back out. 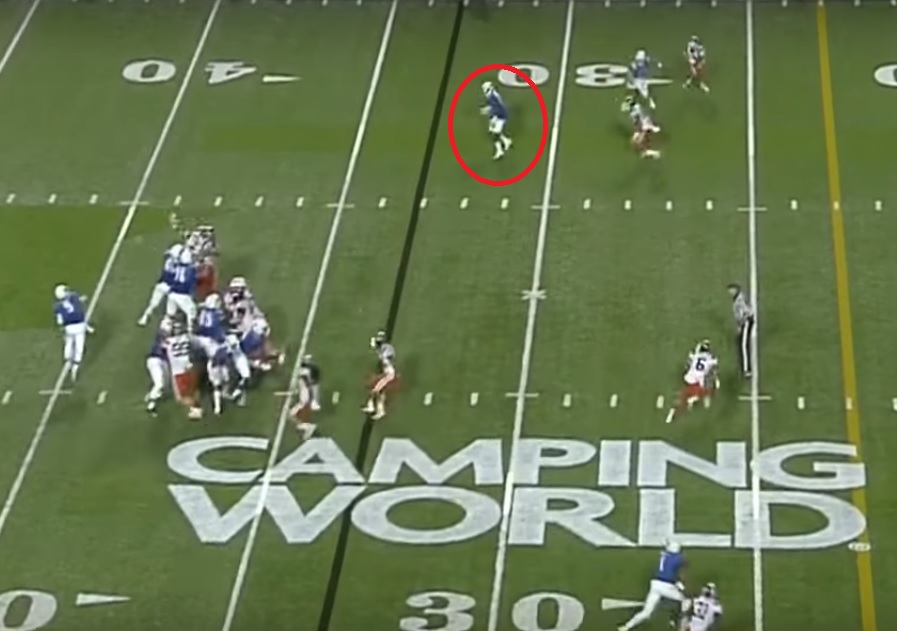 The defender has to step back to avoid running into the lead receiver, which gives the trailing receiver plenty of room to catch a quick pass. 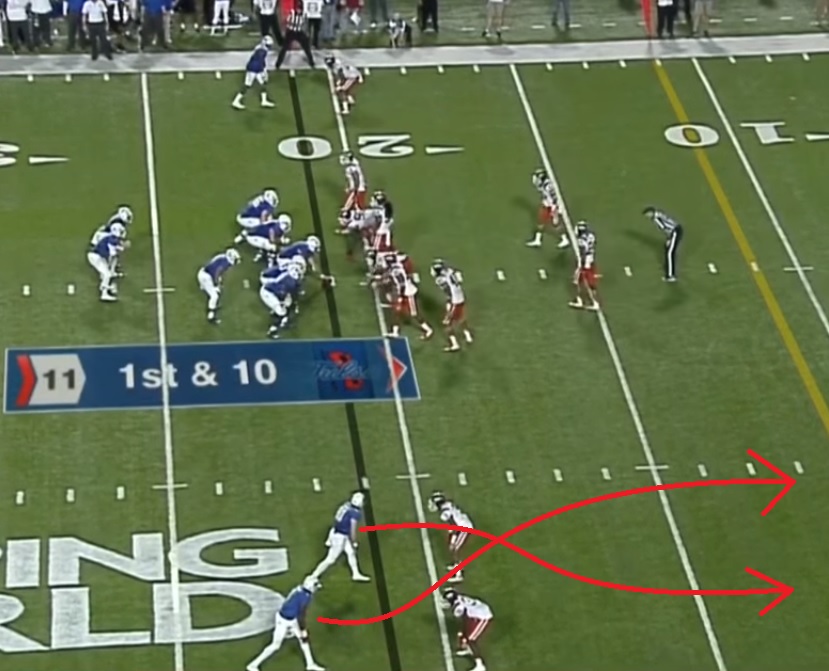 Finally, this play is a staple of the old run-and-shoot offense, the wheel/post.  The slot receiver cuts outside on a wheel route, while the inside receiver cuts inside on a seam or post route.  Ideally, the defenders will get caught up with each other and one of the receivers will come open.

Tulsa’s run game is mostly power-based, with lead blockers and pulling linemen.  Here’s an example with a pulling guard and tight end clearing a path for the running back

The tight end comes across the formation and kicks out the end man on the line of scrimmage.  The backside offensive tackle pulls and leads for the running back. 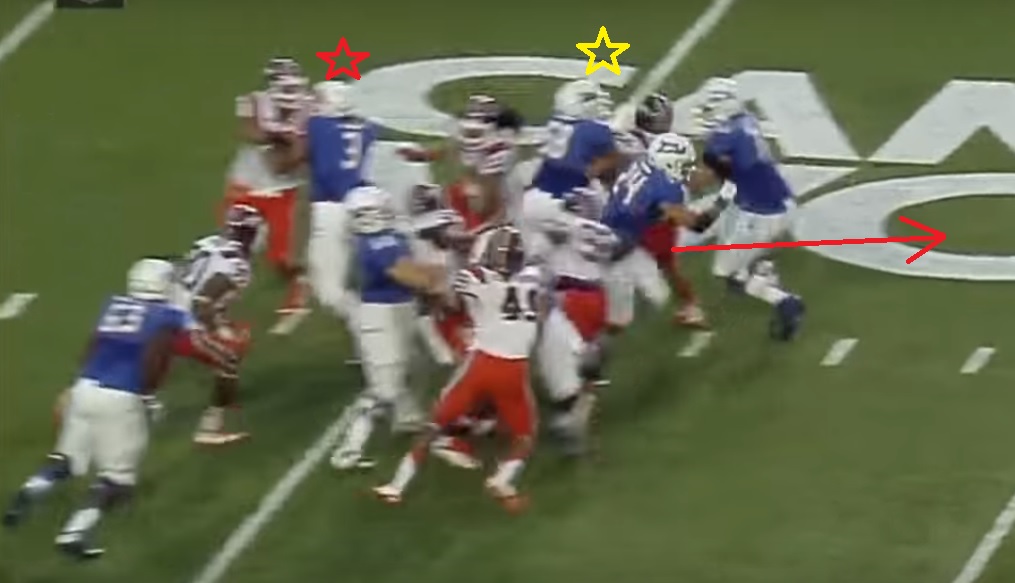 On this play, the tight end clears out the outside linebacker (red star) and the tackle takes out a linebacker (yellow star), clearing a big hole for the running back.  This is an old school, smashmouth run play.

This play is one that was a staple for the Notre Dame offense when Ed Warriner was the offensive line coach – the inside trap play.

The center blocks down on the defensive tackle while the guard pulls around and leads for the running back.

With the defensive so spread out, there are no defenders left to fill the running lane and the running back gets through for a big gain.

Tulsa quarterback Dane Evans wasn’t exactly a dual threat QB – he finished the season with -9 yards rushing – but he was athletic enough to keep defensed honest with his leg.  So even though the option game probably wasn’t a big part of Gilbert’s offense at Tulsa, it was still occasionally used to catch the Virginia Tech defense off guard during the bowl game. 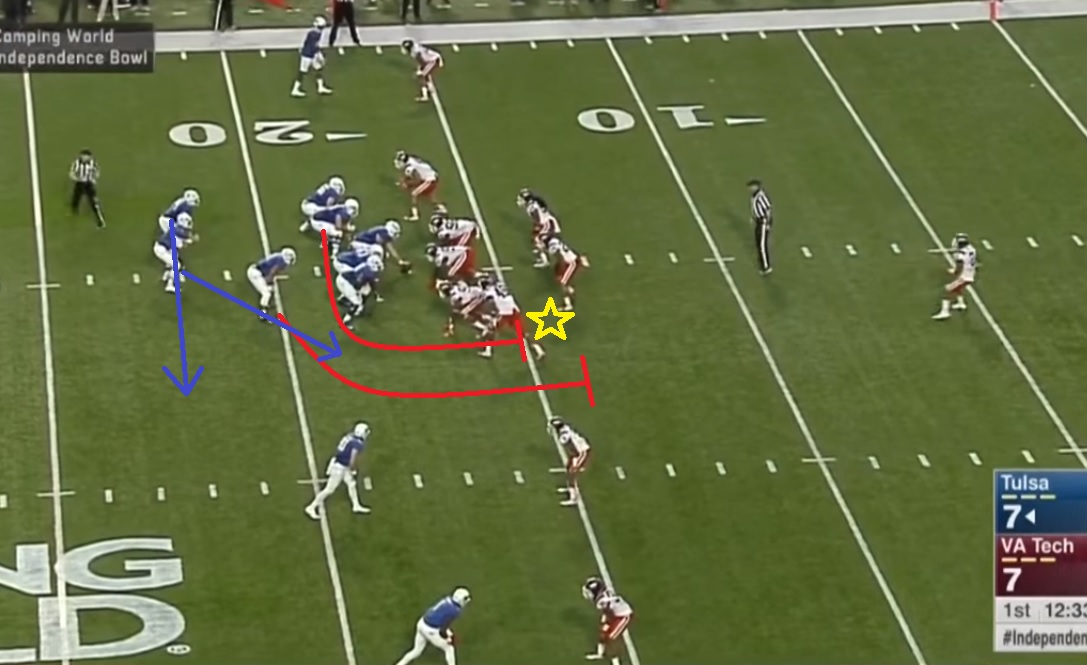 This play fits nicely in Gilbert’s offense because the blocking is almost exactly the same as the power run I highlighted earlier.  The only difference is the tight end turns upfield instead of kicking out the outside linebacker. 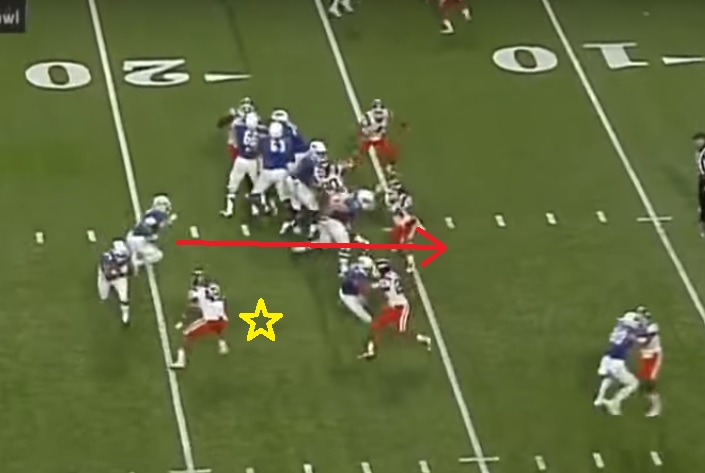 Here, the linebacker widens to follow the running back and Evans keeps the ball for a nice gain up the middle.

Teams like Tulsa without a true dual threat quarterback will generally just use this play as a fly sweep outside run.  But once the defense starts to overplay the sweep, the QB can pull the ball and pick up some yards up the middle.

I expect Texas’s rushing offense to look something like this against Notre Dame.  As I mentioned in part one, Texas has two big running backs in D’Onta Foreman and Chris Warren and Sterlin Gilbert will likely look to them to pound the ball up the middle on power plays, hoping to wear down the Irish defense.

The idea of RPOs is to package a run play and pass play together.  The quarterback can make a presnap and/or postsnap read and decide whether to throw the ball or hand it off.

Baylor is famous for making extensive use of RPOs.  I expected to see a few in Tulsa’s bowl game, but I was only able to pick out one. 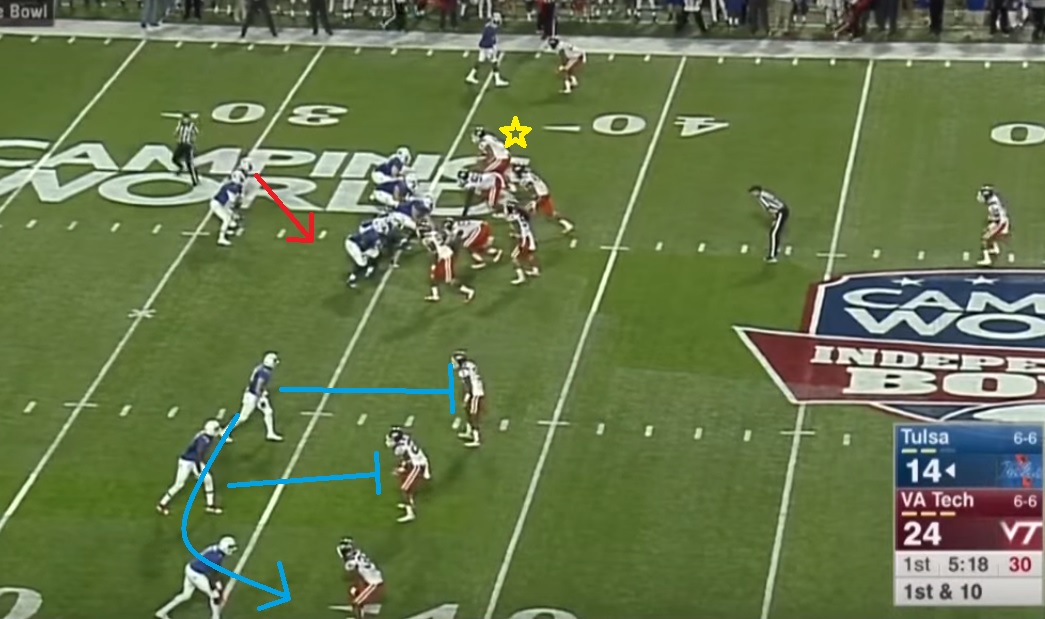 The quarterback has three options.  First, he can make a presnap read and decide to throw the bubble screen to the three receiver side.  If that is covered, he can move on to the second option – handing off on an inside zone run.  But the quarterback is reading the defensive end after the snap.  If he crashes down to take away the inside zone, the quarterback moves on to his third option – pulling the ball and running outside.

If the defense had seven players in the box, then the run play is covered and the quarterback would throw the bubble screen.

So there’s my overview of what the Texas offense might look like on September 4th.  Texas was a disaster on offense against Notre Dame last year but actually played pretty well late in the season.  With more experience and a more cohesive offensive identity this year, I can see Texas fielding a fairly strong offense by the end of the season.  Whether or not they can start firing on all cylinders on day one remains to be seen.  Notre Dame likely benefits from playing Texas in the season opener and that can be big help for an Irish defense that is replacing a lot of star power up front.

Great read Burger. I love these kinds of articles. They make me think I’m smarter than I really am.

Thanks Burgs! Great work as always

Great read Burgs.  I love the X’s and O’s posts!