It’s almost time to cast your vote and while we will ardently avoid politics today we still need your help. It’s been long enough and we want to bring back Clashmore Mike to the Notre Dame sidelines.

Who is Clashmore Mike, you may ask? Well, some of you may know right away. I used to share some editorial space with a guy whose internet alias was Clashmore Mike, and there used to be a Notre Dame blog by the same name that closed its operations almost 6 years ago.

If you’re a Notre Dame fan its a name you’ve probably come across before even if you didn’t necessarily understand the meaning.

The History of “God’s Little Red Dog of Ireland”

Like many things involving the early history of Notre Dame football it’s difficult to separate fact from fiction. Several different versions of the popular growth of the “Fighting Irish” nickname survive and that name wasn’t officially part of the school until 1927–exactly 40 years after the school’s first football season.

For mascots, especially live mascots, the history is even murkier. Here’s what we know about Notre Dame’s adoption of an Irish Terrier dog as a mascot:

Back in the late 1800’s and into the 1900’s mascots were extremely popular, so much so that a team might “carry” more than one for good luck. Same goes for fans attending games–they’d bring “lucky” animals and sometimes the luck only lasted a game or two. Notre Dame was no different where a collection of random animals and costumed students/fans were used in the early days of the football program. In fact, there still survives a photo of the 1909 “Champions of the West” Notre Dame team with an American Bulldog named Mike as their mascot.

The history of the Irish terrier and Notre Dame begins in 1924 when Ed Lynch–a member of the aforementioned 1909 football team–helped the Notre Dame club of Toledo donate the first terrier named Tipperary Terrence to Knute Rockne. That dog passed away just months later after being hit by a car on Niles Road and was quickly replaced by Tipperary Terrence II.

For what its worth, Notre Dame won the first of its 11 claimed National Championships in the terrier’s first year as the team mascot. 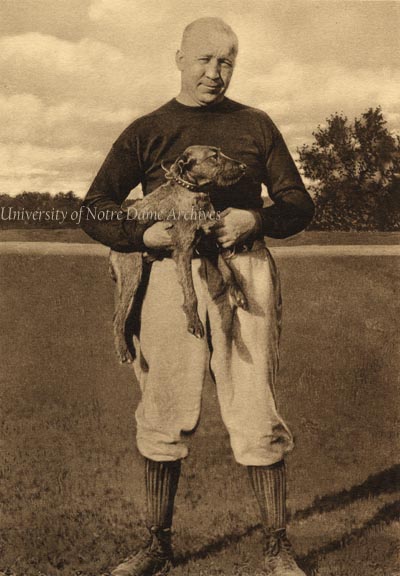 Once Terry II passed away in 1930 he was replaced by another terrier named Brick Top Shaun-Rhu thanks to Charles Otis of Cleveland who donated the dog during the Penn game that November.

Brick Top ran away in 1933 and was replaced by Clashmore Mike courtesy of Chicago breeder William J. Butler. There’s confusion about future names of the dogs–subsequent pups were named “Shannon Invader” and “Shannon View Mike” for example–but Clashmore Mike lived until 1945 and it’s been passed down through the years that Notre Dame began breeding several terriers (who were given Irish birth names) while also informally calling the successive dogs who became the new mascot Clashmore Mike II, III, and so on.

Thus, the name Clashmore Mike survives today as THE name for the Notre Dame dog mascot.

As you’d expect, the canine mascot was pretty awesome. The original Clashmore Mike (1933-45) lived with a handler and trainer on campus and was taught to attack at the sight of any goats to strike fear in Navy’s mascot. He was also trained to do a halftime show which included the hilarious ability to run up to the opponent’s bench and raise its leg. Such was his popularity that Mike was given his own article in each football program on Saturday’s during the fall. 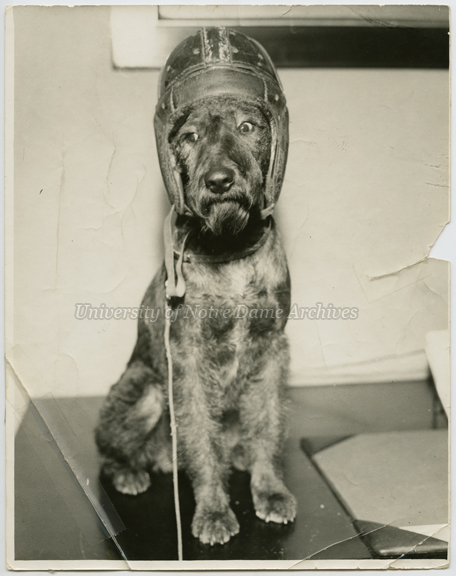 When Clashmore Mike I passed away he was buried beneath the grass inside Notre Dame Stadium. Right around this time, Notre Dame began bringing a student dressed up as a leprechaun to media events and athletic competitions. The two mascots co-existed for over 20 years but in 1965 the university officially adopted the leprechaun and by the late 60’s the Irish terrier was gone. No one is really sure if the last Clashmore Mike died and simply wasn’t replaced or if there was more of an effort to shut things down prematurely while the current mascot was still alive.

Send us pictures to @18stripes on Twitter of your puppies (any breed is fine by us!) with any Notre Dame gear on or around them. You can also email or put pictures in our comment section and we’ll publicize them, as well. 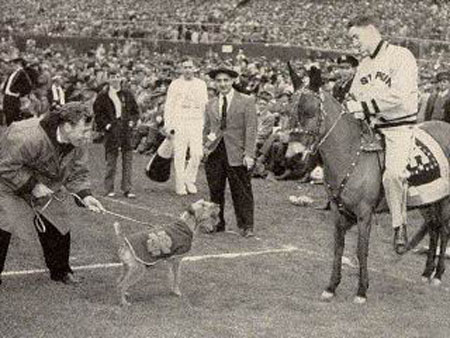 Clashmore Mike in all his glory menacing the Army mule.

College football is loaded with several live dog mascots that stitch together the fabric and tradition of the game. Reveille (Texas A&M), Smokey (Tennessee), Dubs (Washington), Tuffy (NC State), and Uga (Georgia) are some of the most famous names in the country. We think Clashmore Mike should come back and be among the most revered dogs in the country.

Every Monday keep sending us pictures of your Notre Dame loving dogs and let’s see if we can create enough momentum to popularize the return of Clashmore Mike.

The way things are going this year, we deserve less of Clashmore Mike and more of Krull the Warrior King: 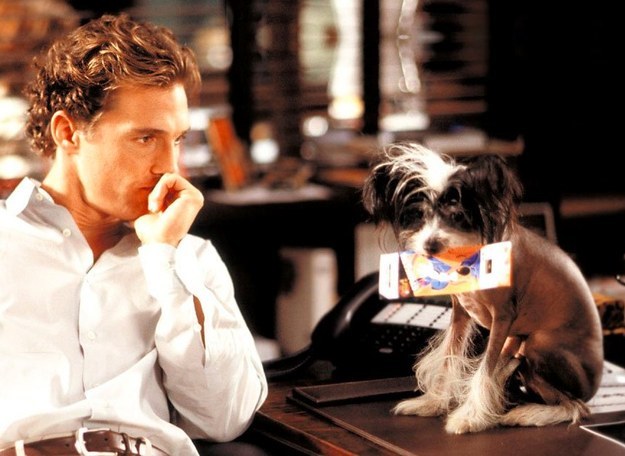 I don’t know that we’re ready for the responsibilities of a dog, a high functioning offense, a competent defense, and reliable special teams.  How about we see if  we can just keep a love fern alive for the next 5 games?

If the dog got loose, it would never be caught.  Too complex of a fencing system.

Can the dog coach defensive backs?

Coach? With that closing speed we can have Mike PLAY corner.

Yeah, but he’d be ejected for targeting every game. Biting your opponent is by necessity leading with the head.

But he’s a good dog.

I don’t want a good dog on Saturdays. Sunday through Friday, he can be a good dog. Saturday, I want him nasty and rabid.

I was worried about his size too, but Mike is actually larger than Shawn Crawford.

As one of the very few on this excellent board who ever actually saw CM, I suppose I should weigh in.

By the time of the late 50’s/early 60’s, nobody was doing much with the dog. Not a lot of publicity, and absolutely no integration with the beating heart of the ND spirit, namely the students. Then I heard that Ara didn’t much like the dog. But that was a rumor courtesy of a SB native 2nd string linebacker friend.

I do recall my uncles who grew up with Rock’s kids talking about the predecessor dogs, and even that Uncle Hank who was at the Army game in Yankee Stadium in 1946 mentioned the dog had made the trip. Hopefully he scared the hell out of the stupid mule, nice pic Eric.

1, A good idea, and a nice classic ND initiative, perfect for a crappy year like the present. Kudos.

2. if we can make it part of a broader effort to reinvigorate the display of spirit, that would be even better, in my humble opinion.

3, I have some concrete ideas to that end if this gains any traction. 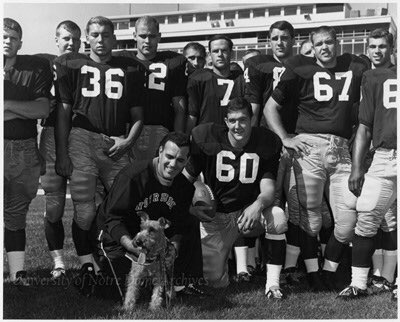 “He was also trained to do a halftime show which included the hilarious ability to run up to the opponent’s bench and raise its leg.”

Today I learned my dog would make a 5-star mascot recruit, no training required.

DO YOU HAVE AN IRISH TERRIER??

No he’s a (nice) mutt from the mean streets of Turcs and Caicos by way of a rescue. I will have to get him some ND swag though and take a picture for social media to support the Clashmore Mike movement.

I think this is a great idea. I’ve never liked the leprechaun as a mascot. Too goofy.

Who is our Shamrock Series foe next year?  I’d be up for seeing Clashmore Mike on the helmet for that one.  Honestly, we need a complete mock-up of that like the leprechaun one a few years ago…

The 2017 schedule will feature seven home games for the first time since 2010, as the Irish take a one-year break from their Shamrock Series games.

“In 2017, the first year in which we will compete in the renovated stadium, we thought it was important to maximize the opportunity for our fans to attend a home game,” said Jack Swarbrick, Notre Dame’s vice president and James E. Rohr Director of Athletics. “We look forward to restoring the Shamrock Series tradition in 2018 and the years beyond.”

I’m sure we’re still doing some kind of crazy uniform for one of them, though.  Do we know which game that’ll be yet?