A Brief History of *the* Football

I scatter the sidelines but only one of me is allowed on the field of play at a time. Woody Hayes often said there are 3 things that can happen when I’m thrown, and 2 of them are bad. Players like me broken in and sometimes my size or feel can vary. What am I?

A football, of course.

In many ways, the football is sacred. Keeping possession of it is of utmost importance and taking it away from the other team is lauded. Yet, how much does a casual fan really know about the actual football? How many know about the football(s) Notre Dame uses for games?

Most are aware that the game of football evolved from rugby in England and the early balls were at first round and then quickly changed to these massively swollen watermelon shapes made from pig bladders. They would stay that way–with constant air inflation issues–until the second decade of the 20th century when passing became a larger part of the game.

In 1912, college football introduced a new standardized size of the football featuring 22″ x 12″ x 7″ dimensions. Eight years later, the American Professional Football Association (re-named the NFL in 1922) was formed and began using a Spalding J5V model football which later added the nickname “The Duke” from the New York Giants then ball-boy and owner’s son Wellington Mara.

The following year, the first valve-inflated football eliminated the need for a stem, which had always caused a lump under the laces. With Rockne’s name on the ball, the “KR,” as it was known, was easier to throw in a tight spiral, and it paved the way for the modern passing game.

It was one of many sponsorship deals Rockne signed that paid him nearly 6 times his base salary with Notre Dame and upwards of $1.3 million per year in today’s money. 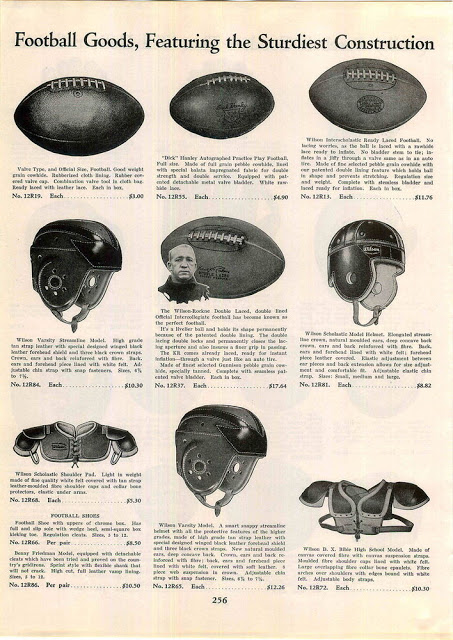 In 1935, the NFL changed the dimensions of their football to 21 x 11 x 7 making the ball easier to throw. College football would follow suit as these dimensions remain in place today. In 1941, Wilson bought “The Duke” name from Spalding and became the official ball supplier for the NFL, which lasts to this day.

Which football has Notre Dame used through the years?

The early years are obviously difficult to track down. You’d think Wilson would’ve been the supplier but Rockne was also rumored to have an endorsement deal with Spalding, too! I found a Wilson game ball from 1933, five years later a ball from Spalding, while in the 1960’s both John Huarte and Terry Hanratty were pictured with a modern Spalding J5V.

In the early part of his career, we see Joe Thiesmann with a Wilson TD Intercollegiate football (introduced in the late 50’s notice no white stripes yet) and in the late 1970’s Joe Montana is still using the same football, now with stripes.

Stretching back to the early 1970’s I haven’t been able to find evidence to the contrary that Notre Dame has been using Wilson footballs for the past 5 decades.

Sometime in the 1980’s Notre Dame switched to the Wilson 1001 college model (basically patterned after the NFL football). HERE’S a shot from 1988 with a clear look at the 1001 model. A few years later, HERE is Rick Mirer with the same ball. By the late 90’s the Wilson football had a “College Football USA” logo on the opposite panel as seen HERE in a picture of Autry Denson.

In the 1970’s and 80’s the manufacturers began experimenting with different materials to make the balls have more grip but by the turn of the century, the football’s really started to become more fancy.

In 2002, the NCAA logo graced a side panel and Notre Dame began using a black-outlined shamrock with a gold monogram inside on the under belly of the ball. The ball remained the same for several years until 2008 when Notre Dame switched to the Wilson 1005* model.

*The rule books state the NFL and college footballs are the same exact measurements. But, this is incorrect in reality. While the Wilson 1001 was essentially an exact replica of the NFL ball, the 1005 model was slightly more angled at each nose of the ball. So, while it may still measure the correct 11 inches long, 7 inches tall, and 21 inches in circumference in the middle the two models are different. The 1005 model is slightly slimmer and will have a slightly different weight and feel while holding and throwing it. This is why the 1001 looks larger overall but the 1005 looks plumper in the middle.

When Brian Kelly became coach at Notre Dame in 2010 he switched the program to a Wilson GST (Game Saving Technology) 1003 model with a shape similar to the Wilson 1005. This was the ball he had been using at Cincinnati and its key differences with the 1005 included: 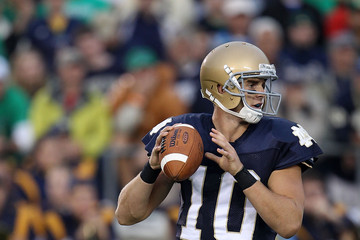 The NCAA logo on the opposite panel was also much smaller and the Wilson script colors were inverted to black with gold outline. The shamrock logo remained on the belly and this new ball remained the same for the first two years under Brian Kelly.

Starting in 2012, a couple of small changes were made to the Notre Dame balls that would last for the next 3 years. The Wilson script outline switched from gold to green, the GST logo changed to green, and after a 10-year run the shamrock was replaced with a green-colored leprechaun on the under-belly. 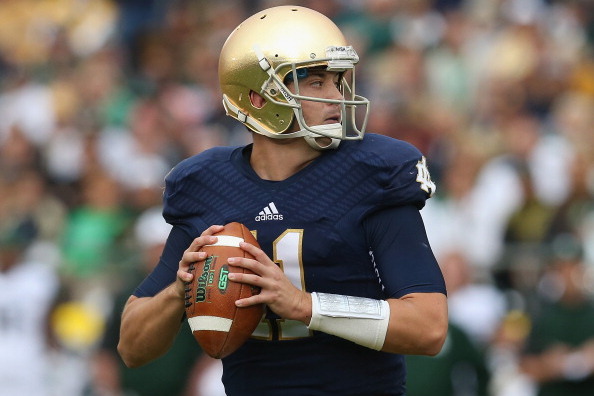 2017 brought more changes as the Wilson logo switched from black with green outline to gold with blue outline. The under-belly also saw the leprechaun removed in favor of the famous “Play Like A Champion Today” script in blue with a faint (but large!) monogram covering the entire panel. 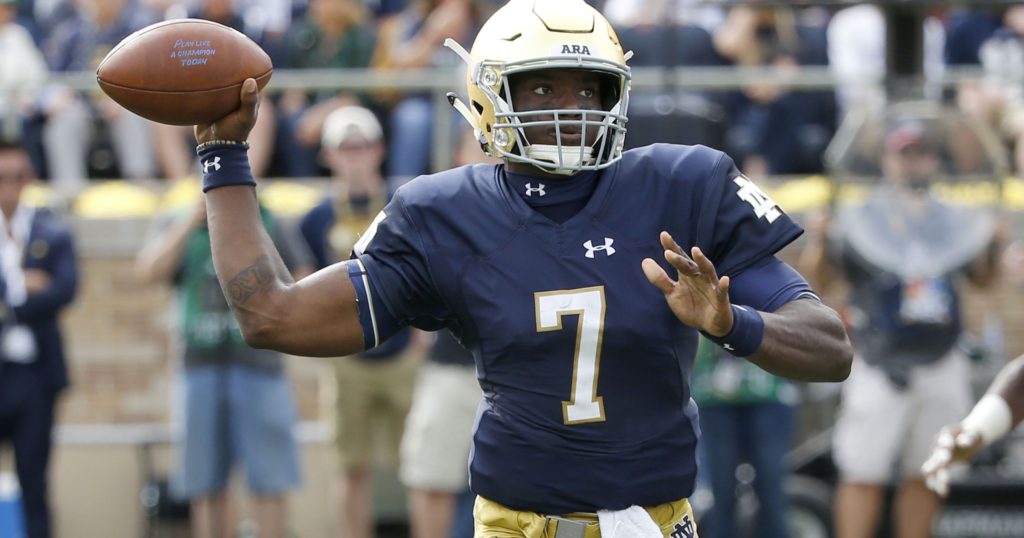 Look closely for the monogram.

This past 2018 season brought only one small change. The belly logo was updated to a simple metallic gold foil imprint. Technically, Wilson calls this ball the CFB GST 1008 model, although it’s a fancy way of saying it’s a special 1003 series.

Something curious I noticed was the footballs used by Ian Book appear to be darker than in recent times with Wimbush. It piqued my attention when Book’s first start in 2017 against North Carolina the ball looks lighter and since he’s become the full-time starter they appear darker. Maybe Book prefers the balls finished in a different way than his predecessor(s)? 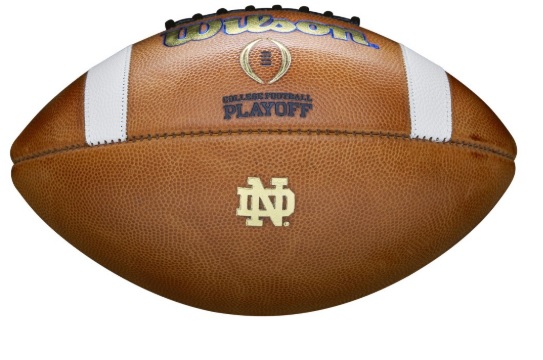 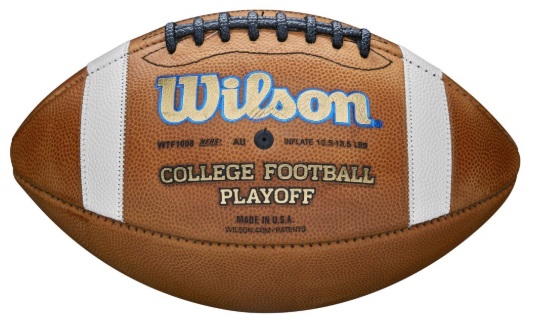 I tried to look and see if there were any commemorative footballs used for bowl games but the only evidence I found was Shamrock Series logos for the 2013 and 2015 games, respectively.

Battle of the Vendors

There are a total of 4 major brands being used among the Power 5 football programs:

Under Armour: BC, Maryland

There are a still a few teams using Wilson 1001 and 1005 models although the vast majority have switched to the GST model. The Nike teams are using either the Vapor One or the Vapor Elite ball. Adidas uses a Dime football. Under Armour has a 695 XT model in use for college.

Interestingly, only Navy and UAB use a ball not included above. Both of those programs use a “Team Issue” ball manufactured by the Big Game Football Factory. This seemed so odd to me but sure enough, the Midshipmen were using that exact ball in 2018.

I love the GST. We used it in high school, and I, personally, think it is the best one around. It’s tacky without being overly so, like the lighter color, and more. I have always found the Nike balls to feel “fake.” As if they are that bad rubber finish or faux leather feel that makes them seem cheap.

I just wanted to mention that Grandpa Occtipus said this was one of the most interesting articles you’ve put on the site. Eric, you are in peak off-season form. I am a little behind on reading here, but this article, the hall of fame, and the Golson article are really great. Thanks for your hard work.

Eric, fantastic article! Just got around to reading it today while searching through past articles I may have missed. Very interesting that the ball stayed the same for so many years. Any idea why the stripes only are on one side of the ball? I recall Kelly yelling at Rees (?) that real qbs don’t use laces and grip the ball where they catch it.

Both the NFL and college used white stripes around the entire football, at first. According to my research, the NFL put the stripes on in the late 50’s or early 60’s very briefly then removed them completely. College put them on in 1969 (I believe) then switched to stripes on half the ball after a season. 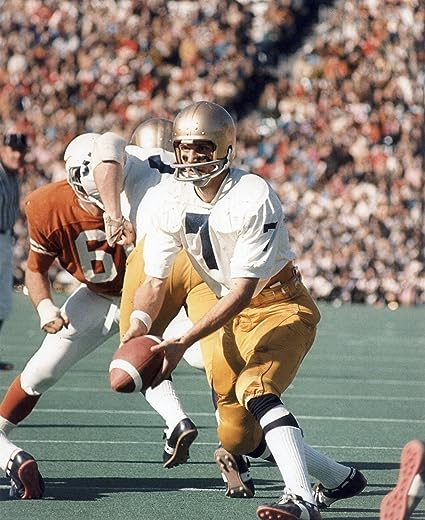 There are a lot of stories about the NFL players complaining about the stripes (painted on in those days) making the ball too slippery. The college game kept them to help visibility at night as a lot of stadiums had poor lighting and they wanted to have a different ball than the pros. So I guess stripes on one side was a compromise.