The temptation for this content today was to re-live the best throws from Notre Dame’s quarterbacks in modern times. But how do you define best? For example, the game-winning pass by Brady Quinn against UCLA in 2006, that is probably the most memorable pass of Quinn’s career and the one most fans remember the most from his time with Notre Dame. Yet, it was a pass that traveled 17 yards in the air to a barely-moving Jeff Samardzija who scampered the rest of the way for the score.

That’s why I chose the title, “Your Amazing Throw” for this today because I wanted to highlight important and memorable throws, yes, but also incorporate passes that had some degree of difficulty and in some cases weren’t the one throw everyone remembers from each player. Let’s start with the kid from Dublin, Ohio.

There’s an argument to be made that whatever good came from the Charlie Weis era it could’ve crumbled to the ground in this game on the road against Michigan State. The Irish lost the previous season in an agonizing overtime defeat and compounding that with another loss to John L. Smith’s combined 9-14 squads might’ve driven the Irish into a ditch for 2006.

Instead, we got THIS.

Notre Dame was out-scored 17-0 in the 1st quarter and had gained 20 yards on their first 14 plays. It was looking really bleak for a while in East Lansing. Then, Quinn fired a beautiful pass to Rhema McKnight to break the shutout.

The Irish still trailed 31-14 at halftime but this moment finally kicked the offense into high gear and began to slowly turn the tide in Notre Dame’s favor before a barrage of Michigan State mistakes handed victory to the visitors.

I have fond memories of this game for two reasons. One, it was just the 2nd time in 8 games that Notre Dame was going toe-to-toe with USC (yes, what an awful era but we take from history what we can). Two, it was one of the best Clausen-to-Tate games from 2009. I know I know you, wanted to see the Golden Tate Band Jump™ but that was too obvious.

Now, this throw from Clausen to Tate?

Please note USC safety Taylor Mays being just too late to break the pass up, falling helplessly into the end zone as Golden Tate hauls in the touchdown. This is important because later in the game, Tate caught a touchdown on a slant in which Mays tried to step to our #23 hero and paid dearly for his audacity. 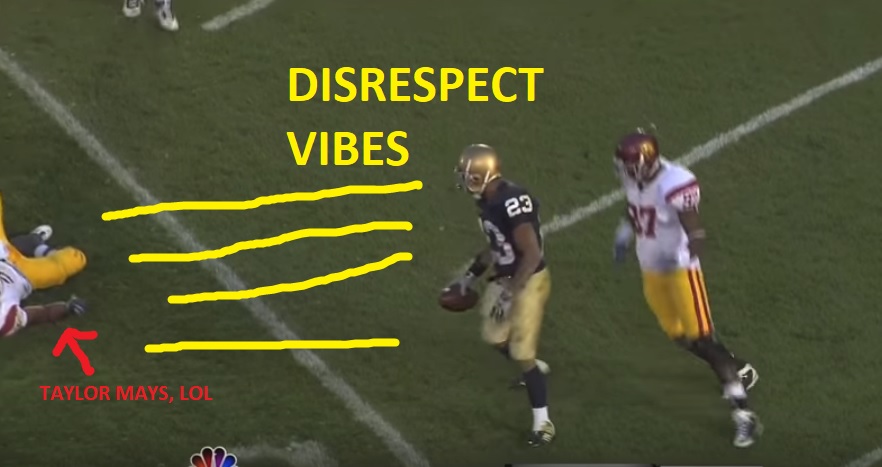 How many fingers would you be willing to lose for one more year of college-era Golden Tate at Notre Dame? Probably a minimum of two?

Crist would lead a touchdown drive on the first series, then exited for the rest of the first half with a mysterious eye/face/head injury. He’d come back in the second half but in between we saw a Tommy Rees flea-flicker interception on his first career pass plus 17 pass attempts from Nate Montana!

This should’ve been an iconic moment early in Brian Kelly’s tenure.

It’s still one of the coolest plays in Irish history, to be fair. Just not as cool as beating Michigan. I don’t want to trigger too much PTSD by bringing up Denard Robinson’s 503 yards of total offense or the fact that Nate Montana threw the ball 7 yards out of the back of the end zone to end the first half and Crist did the same thing to end the game except he one-upped his teammate to 12 yards.

Do not lie to yourself. This is the Tommy Rees throw that should be included.

Rees comes in to the ball game with 2:12 remaining and a few plays later he’s faced with a crucial 3rd down to keep the drive alive. It’s so classic Tommy Rees-at-Notre Dame. The play is 5-wide, Rees tried to check into something, realized the play clock is winding down, tried to call timeout at the same time the ball is snapped and flings a prayer toward the sideline while basically falling down from a tackle.

I can remember this pass coming toward me in the stadium and in the intervening 14 seconds it took to reach the sideline thinking it was surely going to be a pick six. Somehow, it wasn’t nor were there any flags on the field.

This would get my vote for the toughest throw in this article given the circumstances. It’s also gave us perhaps the best video on a throw in Fighting Irish Digital Media history.

I’ll have an article on Everett Golson coming soon but my goodness the skills to be moving to your left and square up for this accurate of a pass over 40 yards on 4th down to win a game against Stanford is just amazing. I miss you, E.

We had to do this. Thrust into action after the season-ending injury to Malik Zaire, we saw Kizer throw this dime to beat Virginia on just his 11th career pass attempt.

Somehow this still feels like an underrated throw. Kizer’s ability to not panic with a free rusher just picked up by Prosise, with a quick backwards jump-cut, to square up and deliver this accurate deep ball was astounding to watch. Seriously, just watch his footwork between 0:18 seconds and 0:19 seconds on this video. It doesn’t even seem possible for someone that big with so little experience.

Finding the right throw for Wimbush was difficult because of his inaccuracy concerns, yes, but also many of his best passes weren’t touchdowns. Plus, he often started out games with his best work which doesn’t always translate to making iconic throws.

An exception can be made for this touchdown pass to Equanimeous St. Brown to kick-start the romp over USC in 2017.

Wimbush was capable of some nice throws down field and this was such a quintessential 2017 offense type of touchdown. USC completely falls for the play-action and Wimbush delivers a beautiful ball for the score.

Rankings Ian Book’s second, third, or fourth best nominee for this article would’ve been incredibly difficult. For the most part, he’s yet to put together enough of a resume with challenging throws down field in big moments.

However, during the regular season finale in Los Angeles he unleashed his greatest throw to date:

This is a very small window to throw into and across the field too. It’s a heck of a catch by Finke and we can’t underestimate how important this throw was to preserving Notre Dame’s undefeated season and the chance to come back and beat USC on the road.

Kizer’s post to Fuller against USC was a beauty as well, but there’s no way it could have been anything other than the Virginia touchdown. When he was on, Kizer could throw a gorgeous deep ball.

IIRC, Kizer also had an incredible throw against Texas where Torii Hunter Jr almost died after being speared on a helmet-to-helmet hit. The end of the play upstaged the throw because of an egregious no-call, but the heat that was required to thread the ball to Hunter in the EZ between two closing defenders was remarkable.

Oh yeah, that was a dime:

I remember thinking Kizer was a legitimate Heisman-level QB after the Texas game (even though I knew the team wasn’t going to be worth it). He had such a fantastic performance that day and it didn’t really continue the rest of the year for whatever reason.

…so of course we subbed in Zaire for a couple series killing all offensive momentum. 2016 was rough.

I AM STILL ANGRY ABOUT THAT NO CALL

Great choices! For Clausen you could have included the entire Hawaii game (even his incomplete attempts were decent throws)

The big looping pass to Tate in the end zone where it looked like no one was there and then poof! Golden catches it was hard to pass up.

Back shoulder touchdown, yup that was my second choice.

Kizer to Fuller happened right in front of me. It was so beautiful.

This would’ve been my Golson throw. Michigan St 2012 rolls right, turns back across the field, plants his feet, and drops it right into FC Goodman’s one available hand since he was being interfered with. https://youtu.be/34O6uCh4MoQ?t=28

Also, for Book i would’ve had a hard time deciding between your pick and his first TD against LSU to Michael Young. Of course the throw to Boykin immediately preceding it in this highlight reel is tough to ignore too. https://youtu.be/jN0jFZjd0oM?t=106

Mine for Golson probably would have been the bomb to Chris Brown that broke the Oklahoma game loose. But graded based on “the moment” and pure difficulty, it’s hard to argue with the Stanford pass in a now-or-never 4th down situation. It’s too bad that Golson collapsed the way he did, because the guy had some special tools for a college QB.

This is a great topic, btw. Thanks for posting, Eric.

I loved Golson. I still believe Kelly messed with his head big time. I hope he doesn’t do the same to Book.

The Slow Motion version of the Stanford throw beats anything ever put together by NFL Films, IMO. Watch ND nailed it with that one.

Also, this is high-quality offseason content. I intend to renew my 18S subscription.

Rookie mistake – you gotta let your subscription lapse and they’ll send you a renewal offer that’s pennies on the dollar.

No joke, this is how I get Irish Illustrated for half off (which is probably my price point for what they produce anyways).

Speaking of which….we’re proud to announce a pre-summer membership discount. Only $99.99/month for 3 years! Buy in bulk.

That was probably the only Hail Mary I’ve ever watched where I was pretty sure it was going to work. Golden Tate was the best GD football player in the country that year.

Oh man, Golden Tate was so awesome. Despite losing that USC game (which wouldn’t have happened had Kamara not slipped coming out of a break, but I digress), it was great to watch Golden just pick on Taylor Mays. Speaking of which, there’s no way Mays could play safety now, since that guy was a pure headhunter.

Eric,
This is just a deliciously fun article. I especially do love all four of those videos of EG to Ben.
I am also truly enjoying the Hall of Fame Pyramid, as I have been around enough to have seen a lot of them, and remember dad and my uncles talking the ones in the 30s and 40…for the 20s, my mom’s dad actually had Gipp in class (whenever he bothered to come to class, Granddad said).
In any case, your selections and descriptions are done with care and talent. Merci, Monsieur!
PS Not to beat a dead horse, and maybe I missed some things, but if any of The Staff wants to take on an analysis of how Venables shut our offense down, I think that would be a super way to finish the off-season?

As someone who only saw it once, and only in increasing states of anger drinking, I remember it seeming like Clemson really just clamped down on our offense. Basically we ran into an insanely talented buzzsaw, with defenders fast enough to shut down all the short YAC routes we had been using all year and an NFL defensive line that mucked up inside runs and gave enough pass rush to discourage long developing pass plays. It was pretty much the nightmare scenario that I had always been worried out when we hired Chip Long from Memphis, where that offense always seems to tear it up in conference play but go off the wheels when facing a talented enough to cover the short routes.

How about 2007 Clausen to David Grimes TD pass that was over turned vs. Stanford. Such a great catch it’s still used in promos even though it was wrongly ruled incomplete.