Our advanced stats preview takes a look at Notre Dame versus Duke as the Irish try to rebound from a 1-2 start.

We kind of saw some early offensive struggles coming for Duke after they lost their starting quarterback Thomas Sirk to an Achilles tear. Freshman Daniel Jones has taken the reigns, and David Cutcliffe has kept an up-tempo, pass-heavy offense in place even with a young QB. Jones is averaging 37 attempts per game, but has been as inconsistent as you’d expect for a redshirt freshman.

Still, the Duke offense has been pretty efficient through the air, utilizing pace (14th fastest tempo in the nation) likely in an attempt help offset a below average line and running game that’s been a mess so far. The Blue Devils have been pretty solid on standard downs (50% success rate), but passing downs have been well below average (26.8%). If that sounds familiar, that’s because it’s identical to the story of the ND defense – simplified situations benefit youth on defense and hurt youth on offense.

What to watch for the Irish defense:

The first pass-heavy, tempo offense they’ll face this year: So far in 2016 the Blue Devils have run a high-tempo (14th in adjusted pace), pass-first offense (running on only 44% of standard downs, 120th). While the Irish have seen a fast-paced attack in Austin, opponents have rushed on a whopping 75% of standard downs (5th-highest in the nation), so this whole airing it out thing will be new.

As if you needed more worries, that’s a concerning combination for a team with a lot of green defensive backs and a history of less than stellar results against extreme hurry-up offenses. James Onwualu mentioned this week that some of the younger defenders had a hard time adjusting to new elements that Michigan State debuted last week, and it’s likely that will be a challenge again.

Seriously, this time we should have an edge in the trenches: If I write this enough it will eventually become true. The Blue Devils have not been able to run the ball at all, and that’s mostly been on the offensive line. It’s an smaller unit, and every stat that measures OL performance – opportunity rate (110th), stuff rate allowed (73rd), line yards per carry (120th on standard downs, 77th on passing) – tells the same ugly story.

Pass protection hasn’t been much better, with unadjusted sack rates ranking 74th on standard downs and 85th on passing downs. Against a freshman quarterback, I’m optimistic that Notre Dame may run the play on Saturday that gets them their first sack, assuming they still want one. The push from the defensive front should look far more “Nevada 2016” than “every other game in 2016”, otherwise there will be problems.

Make ‘em be efficient, then hold to field goals attempts: A bend but don’t break strategy looks like a strong move against this Duke offense – force a young QB to nickel and dime his way down the field without the help of a dangerous running game and a shaky line in front of him. There should be ample opportunity for negative plays and turnovers, where the Blue Devils have already given up 10 (including a staggering 8 fumbles lost) in three games.

Irish fans are very familiar with the struggles in the red zone that can come with an inexperienced quarterback, and Duke is currently one of the worst teams in the country when the field shrinks. Cutcliffe’s team is averaging 3.3 points per trip inside the 40, in part due to the mentioned turnovers but also kicking woes.

Freshman kicker A.J. Reed is 0-3 to start his career on field goal attempts, so don’t be surprised to see Duke play aggressively on 4th downs. They probably would anyways as big road underdogs, but maybe even more so with the kicking worries. 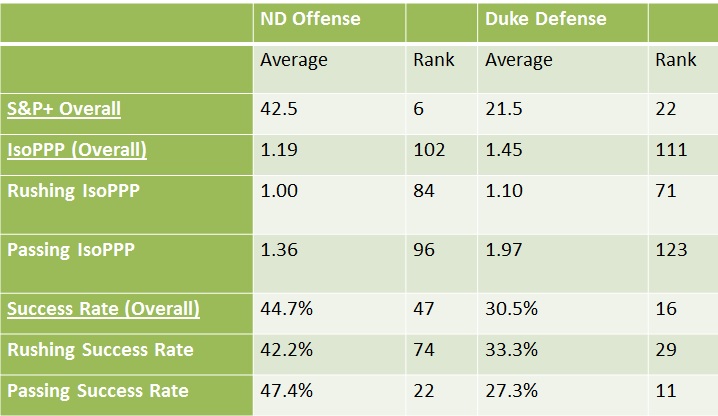 The Blue Devil defense is likely pretty good this year, but some of the numbers above (everything without a +) are a little inflated by facing the powderpuff offenses of NC Central, Wake Forest, and Northwestern.

While it’s a little tough early to tell how strong Duke is, we can tell what they’re trying to accomplish – they’ve been aggressive and disruptive, but have broken for numerous big plays. Their overall havoc rate of 21.3% is 22nd in the country, and when you zoom in another level, you’ll see the aggression come even more into focus – that’s mostly driven by a secondary that has an insane 12.4% havoc rate, 2nd overall.

The corners and safeties have been decently aggressive playing the ball in the air, but mostly have contributed with sacks and tackles for a loss in the run game. The Blue Devils have amassed 14 sacks and 25 TFL in three games, good for 3rd and 21st in the country in this young season. Their safeties, DeVon Edwards, Deondre Singleton, and Corbin McCarthy, are players to keep an eye on, but Singleton will sit the first half after being ejected from last week’s game for targeting.

What to watch for the Irish offense:

Make them pay for taking risks: Duke’s defense has been hyper-aggressive this year, and you’re getting the expected results from that philosophy. Explosive plays have hurt them, but they’ve also piled up sacks, tackles for a loss, and turnovers.

While some negative plays are going to happen when you play a defense playing that aggressively, there will also be lots of opportunities to exploit that aggression. The running game that was so explosive for the Irish a season ago has been bogged down thus far in 2016, but a well-timed counter or draw could find a lot of space for Josh Adams to work with.

Notre Dame definitely has weapons in the passing game far more dangerous than Northwestern and Wake Forest, who torched the Blue Devils when they caught them gambling. With Singleton sitting out the first half, there may be potential for even more breakdowns.

Take what the defense gives you:  One question I had entering the Michigan State game was how long BK and company would stick with the run if it was ineffective against an aggressive Spartan defense. The answer? Maybe a little too long.

While the offensive line has underperformed, I don’t think Duke has the personnel up front to stop Notre Dame on the ground without linebackers and safeties putting in a lot of help. And if that’s apparent early, why not air it out with a talented group of receivers that seem to be getting better every week? Kizer is currently averaging just 26 passing attempts per game, and I’d be comfortable letting the number rise over the following weeks if the run game continues to look stagnant.

Keep converting passing downs: Notre Dame has been successful on 40% of their passing downs through three games, good for 14th overall, and probably around a top five number if you incorporate opponent adjustments (I’m not there yet). Duke’s aggressive defense is going to get through for a sack or two and force some negative plays in the run game; the Irish need to be able to battle back from those situations.

The wide receivers will be integral to that effort, and look for be up to the task. Notre Dame’s four most targeted receivers (St. Brown, Hunter, Sanders, and Stepherson) are all averaging over 14 yards per catch and 8.5 yards per target. Last season only Will Fuller hit both those marks, with an insane 20.3 YPC and 13.2 yards per target. If it can continue, this balance combined with strides from Kizer can keep the passing offense ranking among the best in the nation.

FEI: Notre Dame 36, Duke 16
S&P+: Notre Dame 39, Duke 24
MB: Notre Dame 44, Duke 28. I think this will end up being a shootout with a lot of possessions thanks to Duke’s tempo. The Blue Devil’s offense isn’t great, but it’s better than it has looked the past two games, and David Cutcliffe will benefit from taking some calculated risks. At the end of the day the Irish offense is the single best unit in this game by a significant margin and will carry the day, but it won’t be pretty.

BVG: “Right, so I’ll drop Jay Hayes and Daniel Cage into coverage, and blitz Avery Sebastian and Drue Tranquill from deep safety positions. Got it.”

I’m so glad that I found 18 stripes!  I have missed all of you guys after leaving OFD.

God these stats are depressing.

At this point the defense should see if they can go the entire season without recording a sack.

I’m surprised most of the ND offense numbers are in the 47-102 range. Yet S&P ranks 6, and passing success 22. Should those numbers correlate more closely?

I also don’t understand how ND successful on passing downs would put it in top 5 after adjustments, vs that overall passing 22 number. Is the former a subset of the latter?

Sorry if these are dumb questions, I’m late to the party on advanced stats for sure.