Previewing a rivalry game between Notre Dame and Stanford that now looks like a temporary lifesaver for the winner and another nail in the coffin for the loser.

Two weeks ago the Cardinal were heading into a showdown at Washington where they were slight underdogs. David Shaw’s crew had survived a tough opening three-game stretch unscathed, beginning with a fast start and sluggish 2nd half against Kansas State. The Cardinal then beat USC pretty handily, and staged a dramatic 4th quarter comeback to beat UCLA at the Rose Bowl.

Since then, the wheels have completely come off at Stanford. Injuries on both sides of the ball have taken a toll, and the blowout loss in Seattle may have been a huge blow to the psyche of a team that had hopes of another Pac-12 title and perhaps playoff berth. Losing to a well-coached and surging Washington team is understandable, but the blowout loss at home to Washington State was a clear sign that the Cardinal now have issues that may rival Notre Dame’s flaws.

Stanford’s schedule has been tougher than just about anyone’s (#1 in Sagarin ratings SOS), but 5.24 YPP overall ranks 102nd in FBS and is moving the wrong direction. In the post-Andrew Luck era, Stanford has leaned heavily on the running game (Stepfan Taylor, Tyler Gaffney, and now Christian McCaffery) and offensive line. In the past few years the run game has been extremely efficient and opened things up in the passing game to find tight ends and big receivers one-on-one off play-action.

Without the blocking, things are falling apart

Stanford’s offensive line has dealt with a number of injuries and re-shuffling, and the result has been a group that has yet to gel and is really struggling entering this weekend’s game. Rushing efficiency, where the Cardinal were successful on 52.4% of plays last season (3rd), has plummeted to 36.9% (109th). What’s really troubling for McCaffery & Co. is that those numbers looked just fine until the past two weeks, where Stanford was successful on just 13% of runs at Washington and 25% against Mike Leach’s pirates.

The run game was going to have to carry a significant burden for the offense to help out the new quarterbacks, and that hasn’t taken place. The offensive line hasn’t protected Ryan Burns and Keller Chryst well either – Stanford is almost dead lead in adjusted sack rate (126th).

The Irish defense has shown more hope against the run than the pass, and it will be interesting to see if the Notre Dame defensive line can continue the recent and surprising trend of opponents pushing around Stanford’s O-Line.

The Cardinal have a quarterback situation that feels a bit like my worst nightmare with any two-quarterback controversy. Ryan Burns is the clear starter, but has been yanked for Keller Chryst in two straight games. Both have faced impossible situations recently – a non-threatening running game with McCaffery banged up, a sieve for an offensive line, and a wide receiving corps that doesn’t have the speed to open things up downfield (124th in Passing IsoPPP).

So the Irish have the option to play aggressive, downhill football, knowing that Stanford will try to reinvigorate its running game and the Cardinal aren’t great passing downfield. On the other hand, Stanford has struggled mightily just to put together sustained drives, leading to few red zone visits and few scoring opportunities converted. I’m not sure if there’s a right or wrong approach at the beginning of the game, but the question will be how Notre Dame adjusts based on how easily Stanford can either move the ball consistently or provide a real threat with deep throws. 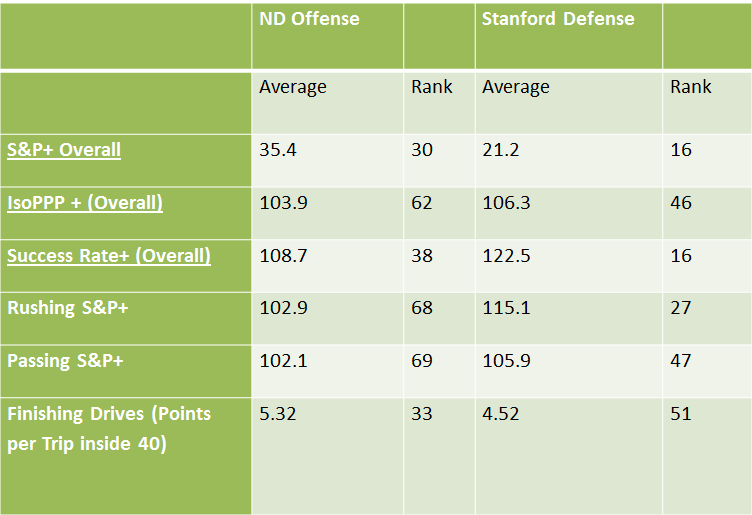 S&P+ likes Stanford’s defense a good deal more than I do. Opponent adjustments work in the Cardinal’s favor, but they haven’t been great using non-adjusted numbers either limiting explosiveness (72nd in IsoPPP) or efficiency (83rd in Opponent Success Rate). It’s like the opposite of the “ain’t played nobody” argument – Stanford’s played a lot of bodies, but haven’t stopped them, so can they stop anybody?

The Cardinal have been better against the run than the pass, allowing opponents be fairly efficient (82nd in opponent rushing success rate) but shutting down any long runs (5th in opponent rushing IsoPPP), allowing just two runs of over 20 yards through five games. The defensive line hasn’t gotten a lot of push, but linebackers and safeties had been able to come up in run support to limit runs from going too far.

That was, until the last few two weeks.  Starting corners Quinton Meeks and Alijah Holder missed the past two games, and seams started opening in the Stanford defense. Meeks and Holder were good enough to hold up in man coverage and allow the safeties to be aggressive in the run game.

Meeks may return this week, but Holder will not, and the results with them out have been ugly – Washington completed 70% of their passes, and Washington State passed for 357 yards with a 73% completion rate. Safety Justin Reid will also be unavailable for the first half after a targeting ejection in the 2nd half of the Washington State game.

The Irish offense has been ok, but struggled at some critical moments in 2016. The lofty goal for this season with a similar scheme and returning QB was to match 2015’s success, which this team is clearly well short of so far. So looking at the numbers, what’s different this season?

I read an article by a national writer this week pointing out Notre Dame’s struggles on 3rd down as a key issue. But is the problem really 3rd down performance, or is it 1st and 2nd down issues making 3rd downs harder than they should be?

Verdict: Yep, it’s mostly bad performance on 3rd downs.  S&P+ supports these numbers I pulled, and has ND ranked 33rd nationally on 1st down, 15th on 2nd down, and 123rd on 3rd down. The Irish are down nearly 10% in success rate and over 1.5 YPP on 3rd down compared to 2015. This year’s edition has had further to travel – 8.0 yards versus 7.4 last season – but the run/pass ratios are very similar.

Another number that does jump out though is the rushing issues on 1st down – 41.4% is about an average success rate, but 3.91 YPC seems pretty low. So I looked back – in 2015, the Irish average 5.44 YPC on first down carries with a success rate of 44.1%, so decently similar efficiency, but a much lower average, indicating a lack of long runs.

As a run-first team, Stanford doesn’t like to get behind early, and the numbers back that up – Stanford’s offense is ranked 53rd in the 1st quarter, 6th in the 2nd, but then 103rd in the 3rd quarter and 82nd in the 4th quarter.

Notre Dame’s offense meanwhile, ranks 10th offensively in the 1st quarter, 73rd in the 2nd, 24th in the 3rd, and 117th(!) in the 4th. A lot of variation right now with relatively small sample sizes, but if Notre Dame can jump out to an early lead, this isn’t a Cardinal offense capable of throwing their way back into the ball game (but never say never against this Irish defense).

So this actually wasn’t a reader question, and probably was rhetorical, but as an unofficial representative of ND advanced stats, I’ll take it! If you actually do have any questions about Notre Dame’s performance in a specific area, let me know in the comments and I’ll be happy to take a stab at a couple for next week.

Offensive line yards are an area when advanced stats are useful, because there generally aren’t any stats to work with otherwise, but somewhat limited. There’s some assumptions built in on how many rushing yards the line is responsible for versus the runner, and depending on if your backs are really good or bad they may not be the case.

But looking at the Irish line, the advanced stats certainly see a lot of regression from what was a top unit in the country last year. Let’s explain the measures and see how Notre Dame’s line ranks.

Adjusted Line Yards: Opponent-adjusted, ALY gives the offensive line credit for the first four yards gained by rushes, 50% of rushes 5-10 yards, and no credit for yards beyond that (those are credit to backs). A 120% weighting is given to runs for a loss. The Irish rank 35th in FBS in this metric currently, down from 2nd in 2015.

Opportunity Rate: Tied very closely to rushing efficiency, how often does the offensive line give the ball carrier space to get at least 5 yards? In 2015 the Irish had an opportunity rate of 45.4% (4th), now down to 39% (73rd) halfway through 2016, although the difference in percentages and ranks should tell you how bunched many teams are in this range.

Adjusted Sack Rate: After adjusting for the quality of opposing defenses and their pass rushing, how often is your QB sacked on passing attempts? Last season the Irish probably weren’t as good as you might remember, 52nd nationally, but they’ve been worse this season (91st).

So in summary, the Irish offensive line has definitely not lived up to the high expectations Harry Hiestand has established, and overall has been pretty middling nationally. I think many fans took for granted that the group’s talent would carry the day but underestimated that only one starter (Quenton Nelson) had more than a handful of starts at the position they started in 2016.

S&P+:  Notre Dame 29, Stanford 26
FEI: Stanford 27, Notre Dame 26
MB: Notre Dame 31, Stanford 28. Both of these teams are in free-fall, and the best route to scoring seems to be passing the ball on either side. I think Kizer and the Irish receivers are a bigger advantage than the banged-up Stanford secondary has over Notre Dame’s youth. Also I hate David Shaw, and cannot predict a win for him.

Another reason to hate David Shaw is that he looks like a ninja turtle with that big ass dome.

Was hoping somebody would do this.

Clearly a Donatello.  Big, dumb, hits people with a big, dumb stick as his only big, dumb idea.

Publius hangs out at EDSBS and suddenly things are starting to make sense. 😀

That place is creepy.

714 comments on that article. Good lord… And they veered off topic about 3% of the way in.

I used to read the articles occasionally, and that’s usually how they go. The articles can be amusing, and then the comment section is sort of a place to just hang out. I think KG used to spend time there too.