I still get Sports Illustrated delivered to my home. I don’t know why, I don’t know who’s actually paying for it, although it seems SI is part of some other package subscription in my household and it will be perpetually sent into our mailbox and tossed into our magazine rack never to be read.

Therein lies the problem–Sports Illustrated isn’t important enough to read anymore. Last year, Michael MacCambridge wrote a wonderful piece for the Ringer, “What Will Become of Sports Illustrated?” that pointed out the obvious for sports fans: Subscriptions are down for the magazine but not to a crippling degree (they claim around 3 million readers today), it’s that not enough people care about SI anymore.

As the magazine continues to go through a year+ long search for new owners the reality of the situation is that we may not be that far off from Sports Illustrated ceasing to exist in its current printed form. It may not be likely but it’s possible we’ve seen the last Notre Dame SI cover already.

To date, Notre Dame has been featured 40 times on a Sports Illustrated cover. However, SI began introducing regional covers some time in the mid-aughts and 4 out of the last 6 covers to feature Notre Dame have been of this variety either through preview magazines (2018 playoffs, 2015 season preview, 2006 season preview) or a commemorative edition (2006 off-season) that took advantage of Charlie Weis’ first season hype.

The first Notre Dame cover came on October 29, 1956 when quarterback Paul Hornung made history, later winning the Heisman Trophy that year. At the time, this was the 9th college football cover since Sports Illustrated debuted in August 1954.

Now, let’s take a stroll down memory lane with some of the best (and worst) Fighting Irish covers. 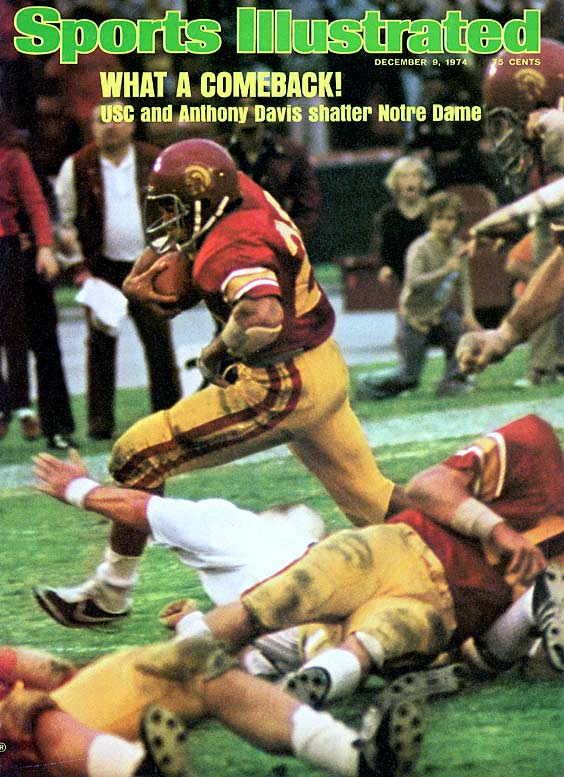 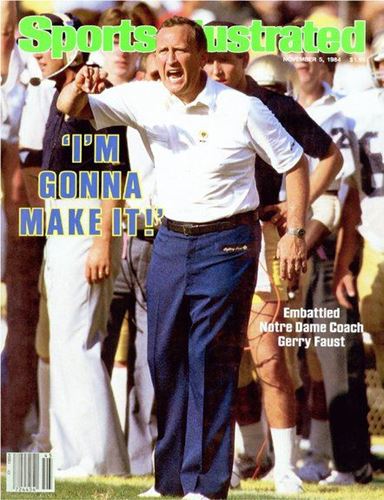 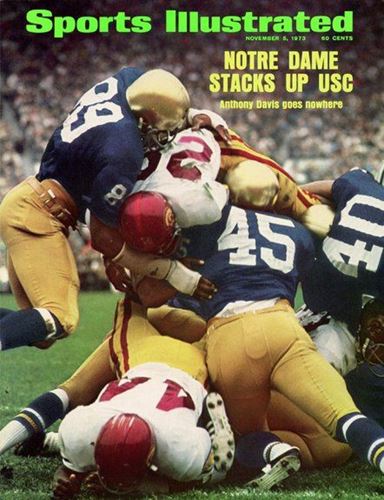 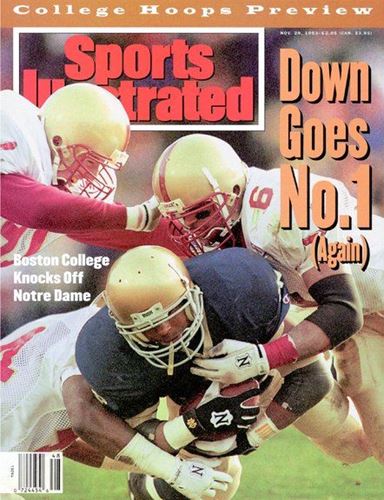 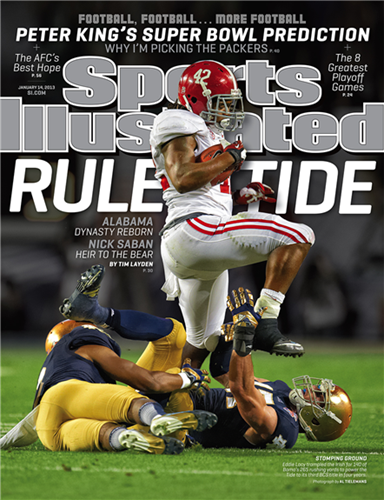 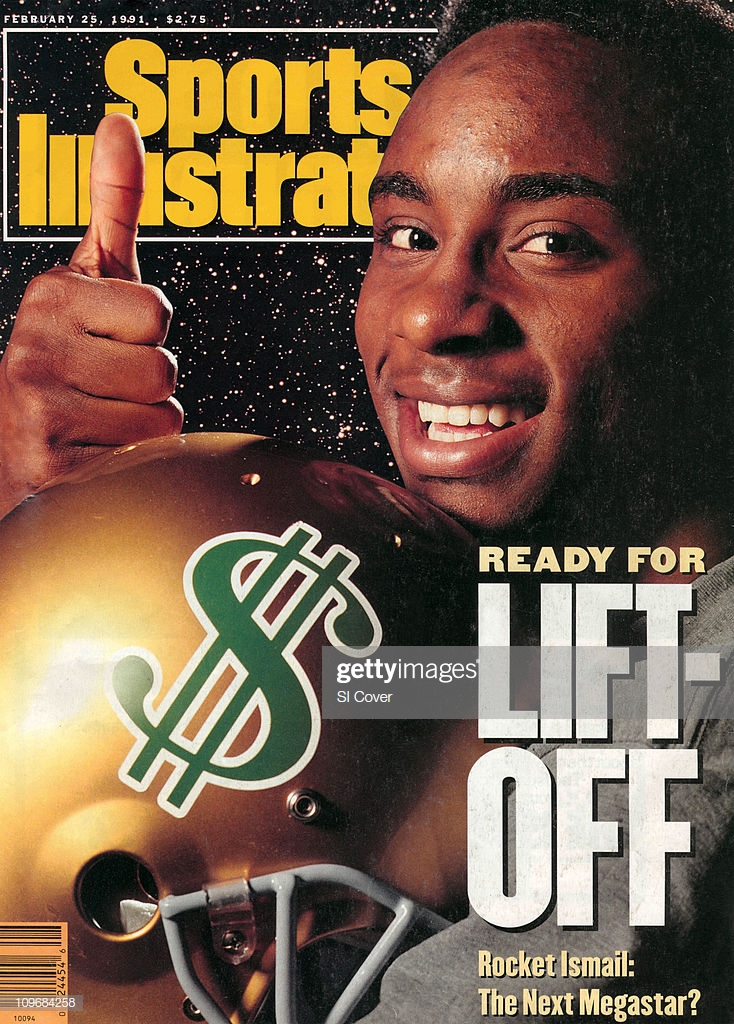 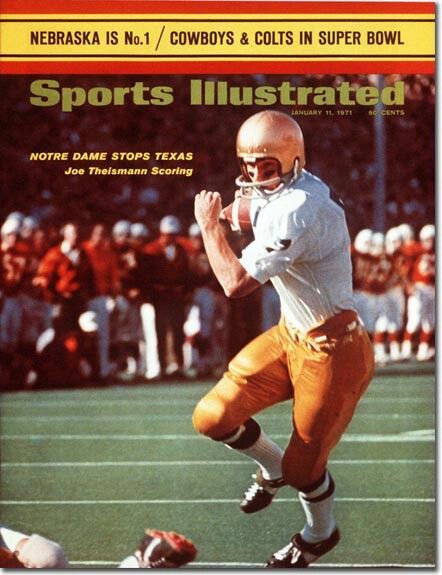 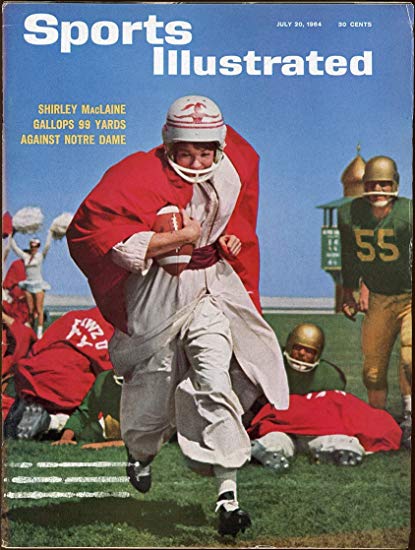 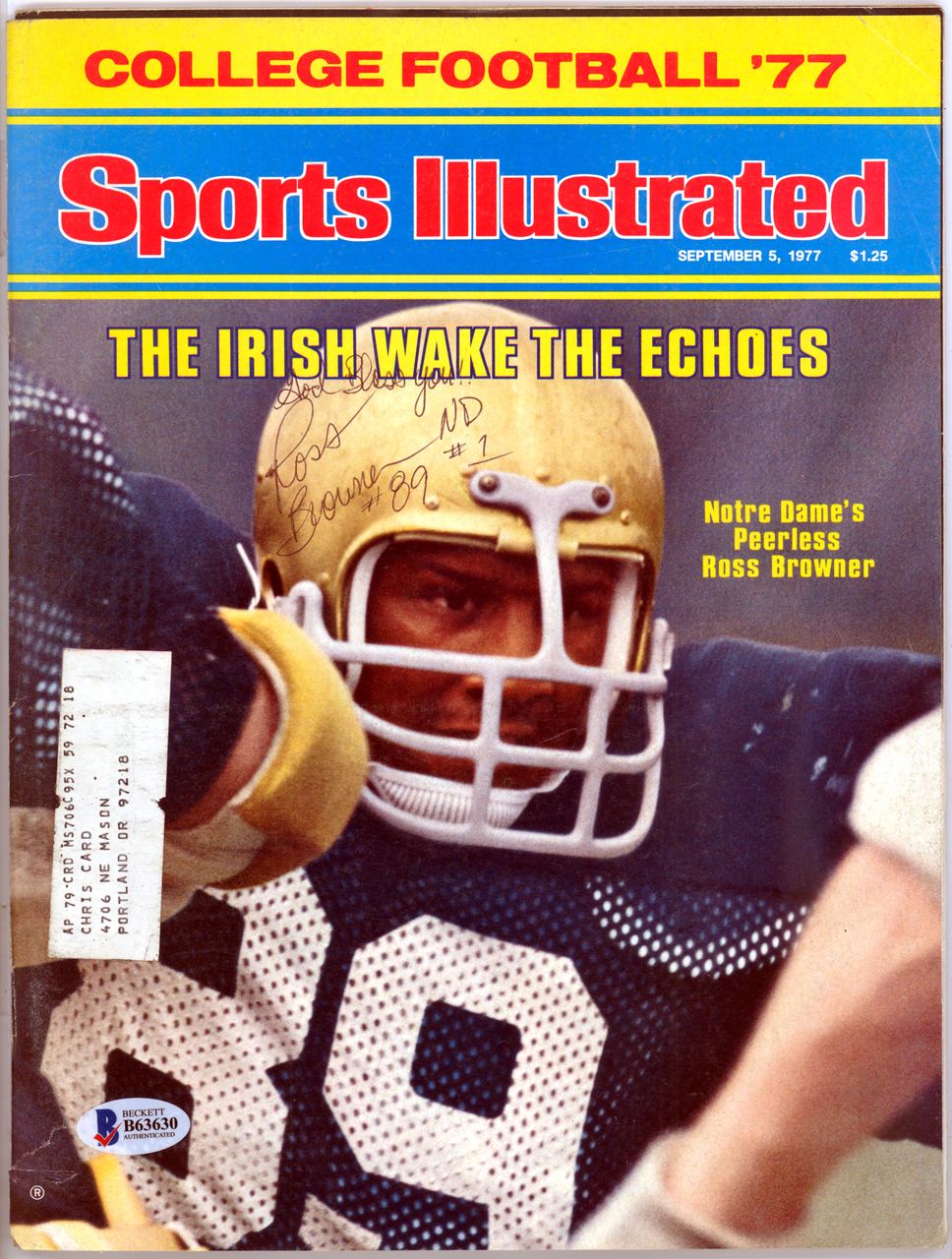 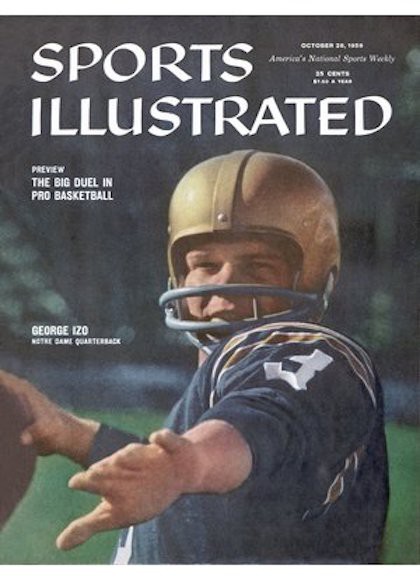 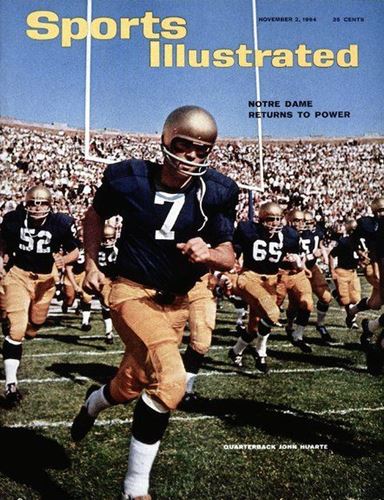 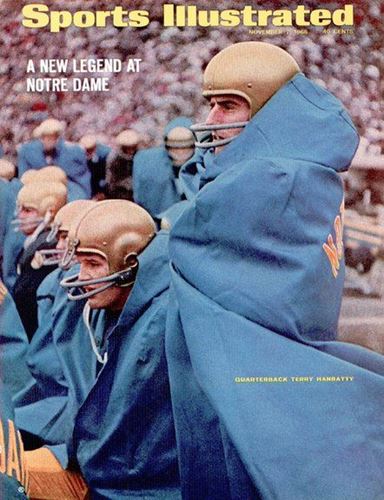 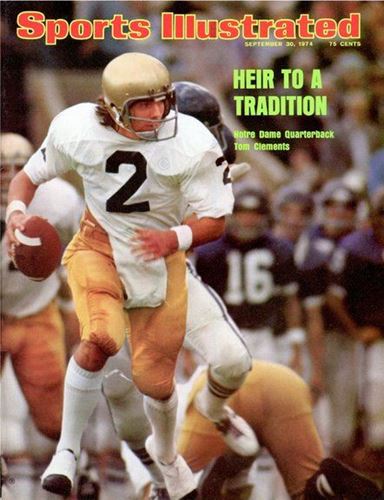 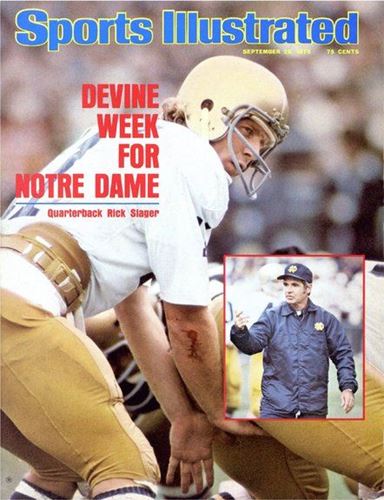 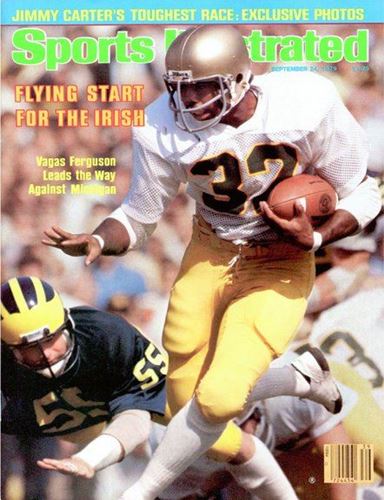 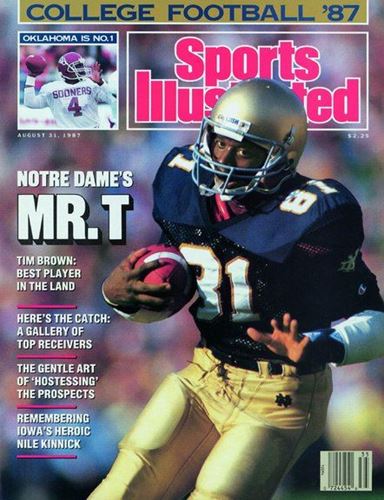 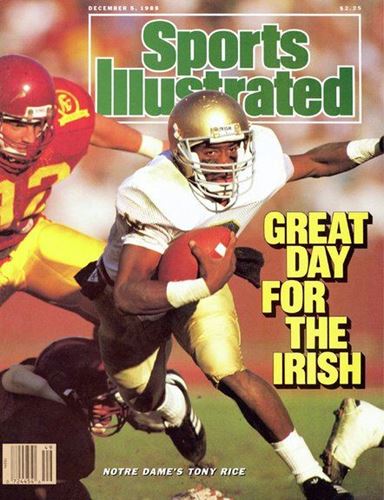 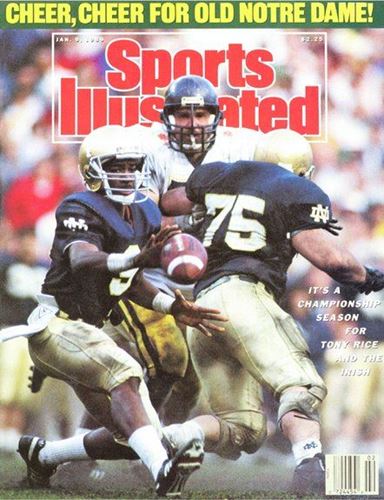 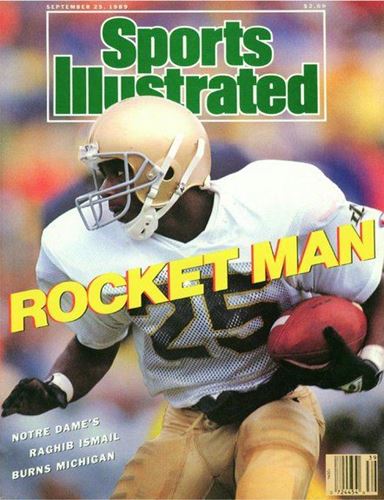 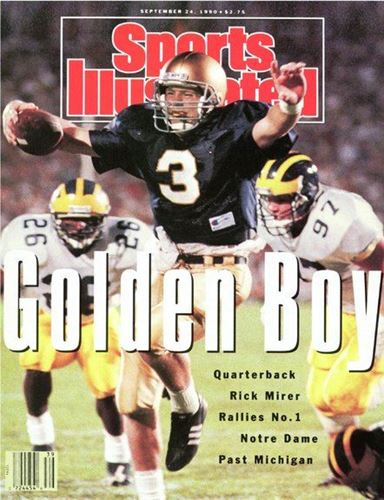 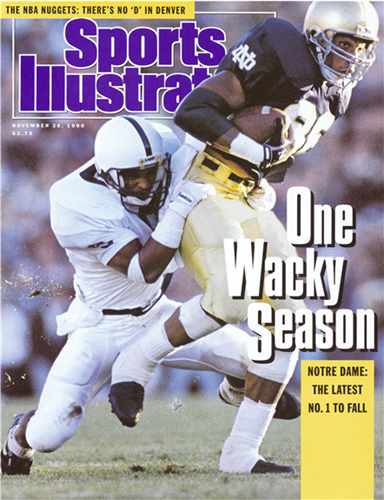 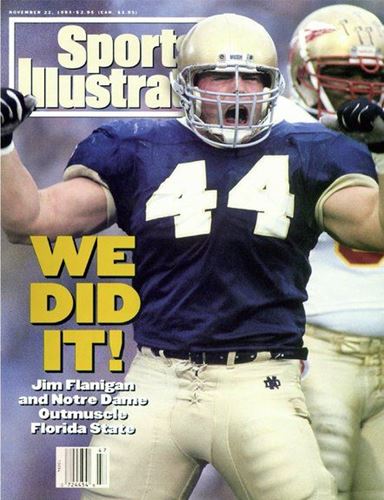 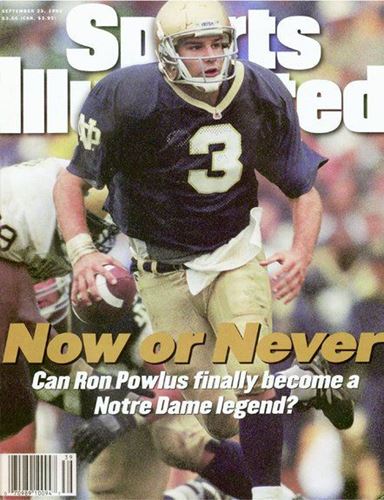 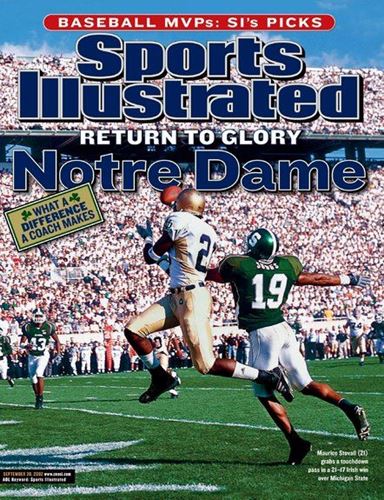 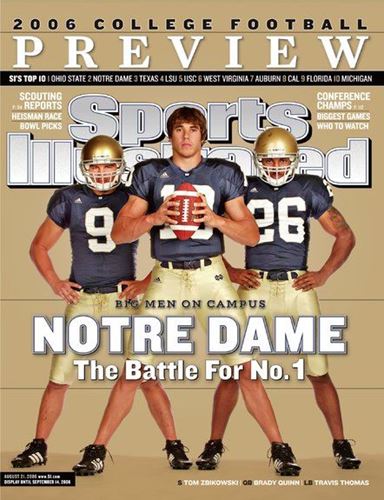 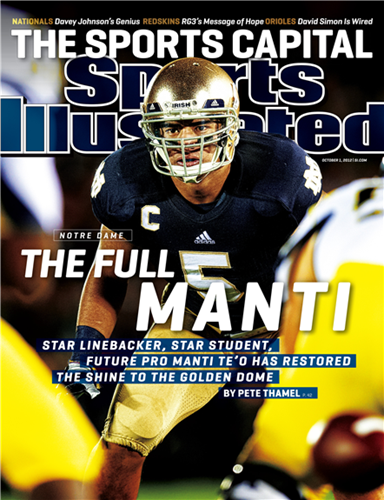 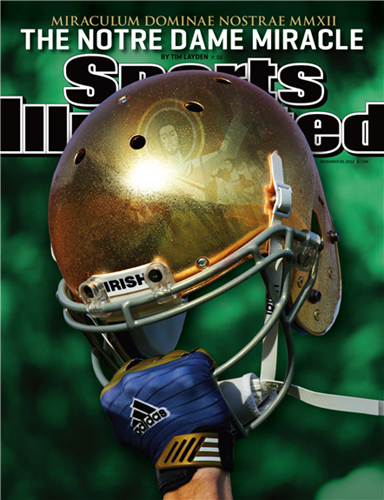 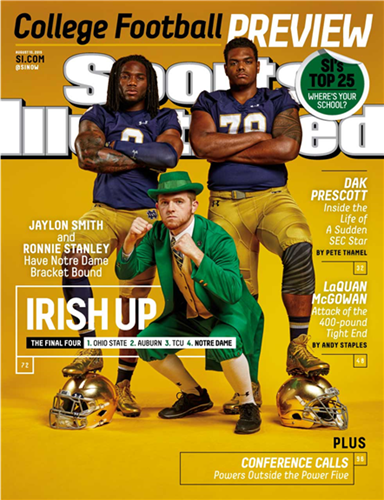 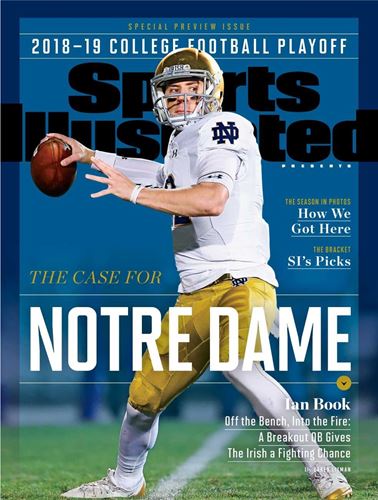 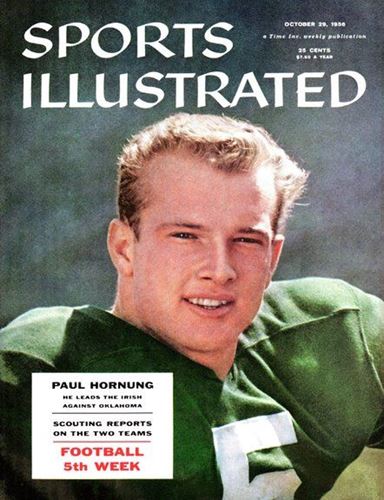 1) There are a handful of covers through years where Notre Dame was clearly defeated and not the main focus of the magazine. Nothing is quite as disrespectful as the 1974 Anthony Davis cover. All you can see is the arm and white jersey from an Irish player extended in agony. Notice the little kid in the background with mouth agape, too.

2) Coaches are sometimes referenced on the covers without being pictured, most famously in the now-embarrassing “Return to Glory” edition from 2002. It’s weird that over the years the only Notre Dame coaches to be physically featured in person on the cover are Dan Devine and Gerry Faust.

3) The November 1984 cover with Faust “I’m Gonna Make It!” is really silly in hindsight and even at the time. Narrator voice: He did not make it.

4) The 1991 cover with Rocket I’ve always wondered if the university powers-that-be were always uncomfortable with the dollar sign on the helmet. It does seem a bit crass but visually it’s a tremendous cover so I guess it’s fine.

5) The 1993 Florida State and Boston College game covers are the only times when Notre Dame was featured in back-to-back weeks. Although, to finish 1988 the Irish were on the cover for their last 2 games of the season with the bowl game break in between.

6) The January 2013 cover from the Alabama game is a perfect summation of that evening. Another disrespectful cover.

7) The July 30, 1964 cover featuring Shirley MacLaine running with terrible ball protection has fascinated me for years. I finally researched it and found out it’s from a movie called, “John Goldfarb, Please Come Home.” The entire movie is on YouTube and I have some notes to share:

*The plot consists of a former football star turned U2 bomber who crashes over the Arab kingdom of Fawz and towards the end of the movie the king blackmails the State Department to arrange a football game between Notre Dame and Fawz University.

*Indulge me this uniform nerd history. The movie was filmed in 1964 and uses green jerseys with gold numbers, a look Notre Dame only used briefly in the late 1940’s and is more familiar of a look from the late 1970’s over a decade after the film was released. They also used helmets with shamrocks which the team wore from 1960-62 but had dropped the previous season before filming began.

*I had noticed the film opened on March 24, 1965 which is weird because this SI cover came out 8 months earlier. Why? That’s because Notre Dame sued Twentieth Century-Fox for unlawful use of the university’s image and the lawsuit dragged out in court past the studio’s planned Christmas ’64 release.

*It was the 60’s man and there are dozens of absolutely strange aspects to this movie none more weird than the entire Fawz team wearing large red capes on the football field. The film ends with cheerleader MacLaine dressing up in uniform, totally illegally running onto the field intercepting a Notre Dame pitch (hence the SI cover shot), and being lifted up into the air by an oil geyser.

8) I’ve always thought the January 1989 cover following Notre Dame’s last National Championship is one of the more underwhelming of all. There were some iconic video shots from that game and they decided on a random pitch from Tony Rice (who was on the previous Notre Dame cover a month earlier in a not dissimilar pose) that is one of the worst game shots to ever grace Sports Illustrated. I’m genuinely shocked Lou Holtz didn’t get this cover.

9) For me, the Sports Illustrated font boxed in at the top of the magazine is such an iconic look that lines up with my childhood. That style ran from the December 22, 1986 issue (Joe Paterno cover) through the February 27, 1995 issue (Darryl Strawberry and Doc Gooden cover) and the covers have never quite looked the same since.

September 1977 – It’s tough to beat Ross Browner in that helmet. What a facemask!

September 1989 – This was one of the first SI magazines I can remember truly coveting as a kid.

November 2012 – I can remember where I was when I first saw this cover. What an incredible job by the Sports Illustrated imaging team.

The magazine may go away, but I really prefer si.com over ESPN.com. I just don’t have the time to read any magazines, much less magazines with information that is already a week behind after publication.

That Flanigan cover was on my dorm wall for at least a year, though everyone blamed the next week’s loss on the jinx.

Agreed, great write-up – love this type of look. Young kids today will never know the rush of looking forward all Thursday long to racing home from school and checking out SI. It was probably my favorite day of the week in early high school. We had the internet but it wasn’t a big deal, ESPN wasn’t really what it is today (late ’90s) so SI was in a lot of ways the most important way to consume sports for me, for quite a long time.

Also as perhaps a humorous aside- after one too many pops I was excited and actually on impulse purchased a copy of the Ian Book “The case for Notre Dame” magazine in mid-December, well in advance of the game. It ended up showing up at my door until sometime in January. Needless to say, it still hasn’t been opened.

Ha! I was given one that arrived after the game. I also have not opened it!

I was an SI subscriber for 19 consecutive years before dumping it in 2017 after they announced they were going bi-weekly (they’d been slicing issues for years before that). I recently got a year as as part of my cell phone company’s rewards program, though, and I still read every issue, more out of habit than anything else.

I loved that November ’12 cover as well. The “Full Manti” cover line ended up being a pretty amusing one in retrospect.

Eric,
Wow, many thanks. These type of articles do justice to our tradition with your usual super blend of great research, searching analysis, and (our) cultural understanding.
The covers take me back — when I was in Holy Cross Seminary we weren’t allowed to have SI or any mags, so I missed the George Izo cover, what a waste of talent, but yes, the ’64 with John Huarte (who I remember in my dorm) is truly an epic and my first time of being excited about an SI cover. I didn’t know about the jinx until after the week after…
I am glad I missed the disrespectful horribles, I was overseas for the SC one and by the time of 2012, in France and no more SI.
But the absolute piece de resitance is the crazy movie story. Thanks for making me laugh a ton!

Wait, you were at Holy Cross Seminary? I feel like we keep finding additional layers to someone who’s already the Most Interesting Commenter on the site.

Sorry I missed this, it’s been a crazy few days back in Paris. I was indeed at Holy Cross seminary. And raised in South Bend to boot (granddad was Dean of Chemistry, which is how my mom and uncles played with the Rock’s kids). Father Peter Rocca (just retired rector of the Basilica) was a classmate, one of the very few of us to make it all the way; I left after my senior year when I discovered I could be in the Infantry even with glasses. And matriculated with the arrival of Ara. Which was…. truly amazing.
Thanks for the compliment, depending of course how you mean “interesting” — for sure, not always a compliment in French!
I do enjoy your comments, among our distinguished fellowship.
Speaking of the talent in the 18S group — though no one will read this — has someone done or could someone do, a deep dive on how Venables outgamed our OC? I am super interested in that, as it evokes the issue of whether our offense can increase the thrust on its learning curve.